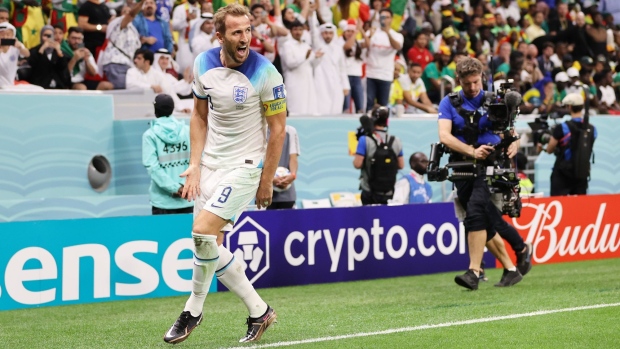 (Bloomberg) -- ITV Plc’s broadcast of England’s World Cup quarter-final against France on Saturday is a golden opportunity for Britain’s largest free-to-air TV network, and could mark one of the largest sporting events in recent years.

It’s the last big match in the tournament to which London-based ITV has exclusive rights to. The company shares UK rights to FIFA Qatar 2022 with the British Broadcasting Corp., but the BBC has the first pick of the semi-finals and its advertising-free offering has historically attracted larger audiences for international football finals, which both channels share.

In comparison, last year’s UEFA European Championship final between England and Italy, shown on both BBC and ITV, brought in about 30 million viewers, while the 1966 World Cup final — the last and only time England won the tournament — reached about 32 million viewers, making it the biggest UK TV audience of all time according to the British Film Institute.

A spokesman for ITV didn’t immediately respond to requests for comment. Last month the business said the tournament will boost total advertising revenue in November and December but as inflation remains near forty-year highs and squeezes consumer spending the broadcaster cautioned “there remains a high degree of economic uncertainty.”

The match comes two days after the full Thursday launch of ITV’s revamped streaming platform, based on newer technology, ITVX. The March announcement of the investment required for ITVX hit ITV’s share price, which has fallen by about a third in the year to date.