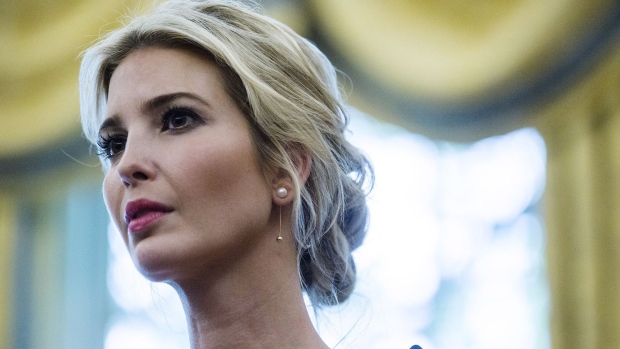 Ivanka Trump made US$4 million from her investment in her father’s Washington hotel last year, according to a disclosure released by the White House on Friday.

She also made at least US$1 million from her line of branded apparel, jewelry and other merchandise, down from at least US$5 million in the previous year. Trump, 37, announced in July that she was closing her fashion businesses amid controversies over her role in the White House and after some big-name department stores dropped the brand.

Together, Trump and husband Jared Kushner earned between US$28.8 million and US$135.1 million in outside income while working as unpaid senior advisers to her father, President Donald Trump, their disclosures, which covers 2018, show.

The reports, which list the assets and sources of income for Ivanka Trump, her husband and dependent children, have yet to be approved by the White House counsel’s office. They will also be reviewed by the Office of Government Ethics.

Administration officials, including cabinet members and top advisers to the president, have to file annual financial disclosure forms with their agencies by May 15, which must make them public 30 days later. The forms show incomes and the value of their assets in broad ranges, as well as providing information about employment arrangements, sales and purchases they’ve made while in office and gifts they’ve received.

Though he’s no longer in the White House, Gary Cohn, Trump’s first chief economic adviser, is listed on acting Chief of Staff Mick Mulvaney’s report. The former Goldman Sachs Group Inc. president paid US$2,500 for Mulvaney to attend two golf tournaments in June and October last year. Mulvaney’s disclosure says that Cohn, who left his government job in April 2018, didn’t cover travel costs, but did put Mulvaney, who is director of the Office of Management and Budget, up in his home during the tournaments.

National Security Adviser John Bolton, who joined the administration in April 2018, reported US$117,499 in salary from Fox News before his appointment. He also received a US$183,040 buyout from the Rhone Group, the investment banking firm where he was an adviser.

Stephen Miller, Trump’s point person on immigration issues, had US$40,000 of legal fees paid by the Patriot Legal Expense Fund, set up to help pay fees incurred by officials in linked to investigations of the Trump campaign, transition team and administration. Miller served in all three.

Kushner, 38, disclosed at least US$27 million and as much as US$135 million in debt, the same amount he disclosed last year. The form shows his purchase of PV Bungalow LLC, a boutique hotel in Long Branch, New Jersey, for between US$1 million and US$5 million, plus the purchase of the liquor license for the property, which cost at least US$15,000 more.

Kushner also spent between US$1.5 million and US$3 million on residential real estate in Brooklyn. The form lists 132 transactions made in 2018, though the actual total is higher because some entries lumped together multiple sales of condo units made in a single property.

His wife lists assets and income worth between US$187.6 million and US$786.3 million, the document shows. She provided no value for her shuttered fashion brands, compared with US$50 million the year before. The company still holds trademarks in the U.S., Canada, Mexico, the European Union and 23 other countries.

Like her father, Ivanka Trump and her husband retained their ownership in their private businesses when they became White House advisers, a decision that critics say has left them open to conflicts of interest and influence by foreign countries.