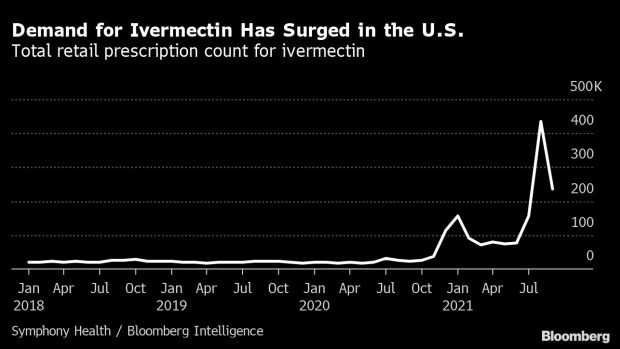 An ivermectin tablet arranged in Jakarta, Indonesia, on Thursday, Sept. 2, 2021. The U.S. Food and Drug Administration warned Americans against taking ivermectin, a drug usually used on animals, as a treatment or prevention for Covid-19. , Bloomberg

(Bloomberg) -- Poisonings from taking ivermectin, an antiparasitic drug that some people have used in an attempt to treat or prevent Covid-19, rose sharply in August, according to a report from the Oregon Poison Center.

The center, which also serves Alaska and Guam, received 21 calls from people reporting ivermectin toxicity in August, up from a previous average of less than one per month, according to the report published Wednesday in the New England Journal of Medicine. Approved to treat parasitic worms in both people and livestock, ivermectin has surged in popularity recently as fringe groups, vaccine skeptics and social-media figures hype it as a cheap and accessible treatment for the coronavirus.

Among the 21 reported poisonings, six people were hospitalized, including four who required intensive care. All six hospitalizations were in people taking ivermectin to prevent the viral disease, according to the report. Symptoms included gastrointestinal distress, confusion, weakness, loss of muscle coordination, low blood pressure and seizures.

Ivermectin may lower replication of the coronavirus in laboratory dishes, but randomized, controlled trials don’t indicate a benefit for Covid, the study authors from the Oregon Health & Science University wrote. Improper use “may result in serious side effects requiring hospitalization.”

Other institutions have issued cautions regarding the same dangers. In September, Utah’s health department warned against using ivermectin to treat Covid after a patient who took large amounts was hospitalized.