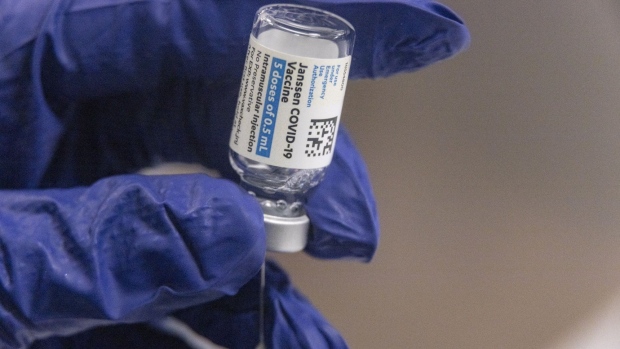 The Food and Drug Administration’s vaccine advisory group voted unanimously Friday in favor of recommending the booster for people 18 and older who received their initial immunization at least two months earlier.

FDA’s Vaccine and Related Biological Products Advisory Committee voted to back Moderna Inc.’s booster Thursday, and Pfizer Inc.’s additional shot was authorized after the panel’s recommendation. While President Joe Biden had foreseen offering boosters to all vaccinated Americans eight months after their first dose, the panel has so far recommended them for people at least 65 years old and younger adults who risk severe illness or viral exposure at work.

J&J presented data to the committee indicating that its vaccine loses efficacy over time, and that a booster shot is safe and can help restore both efficacy and levels of protective antibodies. The panel was originally asked to consider whether a six month interval would be more effective, but decided not to consider that question.

Seen as a convenient, effective alternative to two-shot messenger RNA vaccines, J&J’s single-shot immunization has seen far less use in the U.S. The vaccine has demonstrated less efficacy than Moderna and Pfizer products, and has been linked to rare episodes of a rare clotting disorder.

The panel’s consideration of J&J’s vaccine represents “a public health imperative,” said Arnold Monto, a University of Michigan professor of public health and epidemiology, who serves as acting chair. “What we’re seeing is that this is a group with overall lower efficacy than we have seen with the mRNA vaccines. So there is some urgency here to do something.”

Now it’s up to the Food and Drug Administration to decide whether to authorize it. The agency isn’t required follow the panel’s recommendation, but it often does.

Then the baton will be passed to the Centers for Disease Control and Prevention’s vaccine advisers, who are scheduled to meet Oct. 20 and 21. The Advisory Committee on Immunization Practices could then make a recommendation on boosters from both Moderna and J&J. CDC Director Rochelle Walensky would then make a final decision on the agency’s recommendation.

Both the FDA and CDC and have been somewhat at odds with their vaccine advisers on boosters. The FDA revised and narrowed a suggested recommendation for Pfizer’s booster after its advisers voted it down. Walensky overruled her advisers who also suggested a narrower recommendation for use of the booster, drawing questions about whether she had been influenced by political pressure.