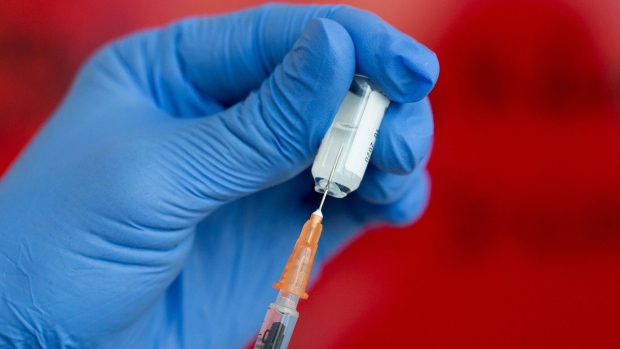 A medical worker draws liquid from a vial with a syringe in this arranged photograph taken at the Chaika Clinic in Moscow, Russia, on Monday, Aug. 10, 2020 , Photographer: Bloomberg/Bloomberg

As the race for a COVID-19 vaccine gets closer to the finish line, investors are parsing details of trial designs like never before as they handicap which is most likely to succeed.

Johnson & Johnson confirmed in an email Thursday that it plans to test its COVID-19 vaccine in as many as 60,000 people, twice the number of other big trials being conducted in the U.S. The company first posted the design for the trial on Aug. 10, and it is set to begin in late September.

Meanwhile, Pfizer Inc. released favorable safety data from a Phase 1 trial of its vaccine. The New York-based company, which is developing its product with German partner BioNTech SE, hadn’t previously released safety data on the shot it will move into a final-stage trial.

“Investors are trying to decipher who’s going to be the winner and who might be left behind,” said Yaron Werber, a Cowen analyst, in an interview.

The Pfizer data support the company’s “slight lead” in the race, according to Werber. J&J researchers, meanwhile, “are buying themselves a lot of insurance” with an extra big trial aimed, he said, at making “sure they are coming out with positive data.”

Shares of both Pfizer and New Brunswick, New Jersey-based J&J gained on Thursday, rising 1.2 per cent and 0.7 per cent, respectively, in New York trading after the announcements.

There are more than 160 COVID-19 vaccines being developed worldwide, and about 30 have entered human trials, according to the World Health Organization. Even before scientists know whether the inoculations will work, many of the furthest-along companies are already starting to produce the products and cutting deals to supply shots to governments worldwide.

In the U.S., two messenger RNA vaccines have entered final-stage trials, including Pfizer’s vaccine and a competing shot from the biotech company Moderna Inc.

“We can confirm that planning and recruitment is underway” for J&J’s Phase 3 trial, company spokesman Jake Sargent said in an email. The trial plan “is intended to be as robust as possible,” he said, and will be conducted in places with high rates of COVID-19, based on epidemiology and modeling data.

On the surface, the J&J trial will be about twice as big as the final-stage vaccine trial underway at Pfizer. In an interview, Philip Dormitzer, Pfizer’s vice president of viral vaccine research, said the the nation’s high infection rates means the company expects to hit the needed number of COVID-19 cases with 30,000 people or less.

If the incidence rate suddenly drops, the trial size could be increased, he said. The trial is enrolling rapidly and had more than 9,000 volunteers as of August 19th, he said in an interview.

“Things are going very quickly,” Dormitzer said. “We remain on target” to have results ready to submit to regulators in October.

The U.S. Food and Drug Administration is tentatively planning to hold an advisory panel meeting on October 22 to discuss COVID-19 vaccines, according to Anand Shah, the agency’s deputy commissioner for medical and scientific affairs. Pfizer’s Dormitzer said he couldn’t say whether Pfizer would have results in time to present at this meeting.

Pfizer and BioNTech also posted Phase 1 data from its vaccine candidate on medRxiv.org, a preprint site for research results that haven’t yet been published.

The company has tested several messenger RNA vaccines in its phase 1 trial, and previously released safety results for one of them. But when it began large scale trials in late July, it used another RNA vaccine candidate that it hadn’t yet revealed early results from.

There was nothing mysterious about the switch, Dormitzer said. Pfizer got the safety data from the second vaccine candidate shortly before it began larger scale trials at the end of July. It appeared to be equally good at generating antibodies against the coronavirus as the first vaccine, but with fewer side effects.

That made the second vaccine the obvious choice to move into final-stage trials, he said. But because results were flowing in so fast and decisions were being made quickly, Dormitzer said there wasn’t time to compile and release the safety data for the second vaccine until now.

“It was a surprise,” that the second vaccine had fewer side effects, he said, calling the result a “bit of a vindication” of their strategy of testing multiple RNA vaccine candidates in Phase 1 trials, before selecting the best one for large-scale trials.