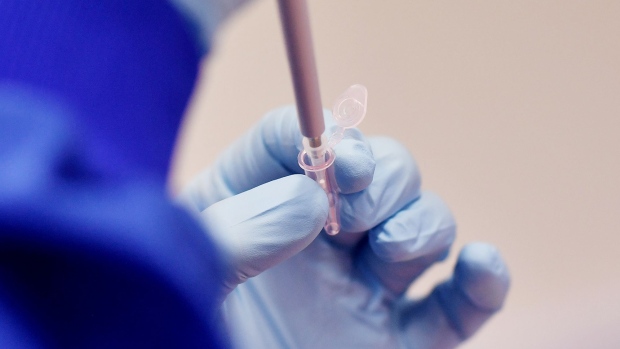 An employee works at the Stabilitech laboratory in Burgess Hill south east England, on May 15, 2020 where scientists are trying to develop an oral vaccine for the COVID-19 illness. , Ben Stansall/AFP/Getty Images

Johnson & Johnson’s experimental coronavirus vaccine protected a handful of primates with a single shot in an early study, prompting the U.S. drugmaker to start trials in humans this month.

The vaccine prevented infection and protected the animals’ lungs from the virus, J&J said in a statement Thursday. The health-care behemoth kick-started human trials on July 22 in Belgium, and in the U.S. earlier this week.

The data “show our SARS-CoV-2 vaccine candidate generated a strong antibody response and provided protection with a single dose,” Paul Stoffels, the drugmaker’s chief scientific officer, said in the statement. “The findings give us confidence as we progress our vaccine development and upscale manufacturing in parallel.”

J&J aims to embark on the last phase of tests in September, compressing the traditional timeline as it races against others such as GlaxoSmithKline Plc and AstraZeneca Plc for a shot to end the pandemic. The stock rose 1.3 per cent in trading before U.S. exchanges opened.

J&J, which received a US$456 million award from the Biomedical Advanced Research and Development Authority, has already entered discussions with the U.S., the European Union, and governments around the world about supplying its vaccine should it prove successful in the clinic. The company has not yet determined a price tag for its shot, though top executives suggest it will be offered on a not-for-profit basis for the duration of the pandemic.

The New Brunswick, New Jersey-based drugmaker’s technology is based on the human adenovirus, a type of common cold virus. It’s an approach that is perhaps best known for its use in an Ebola vaccine.