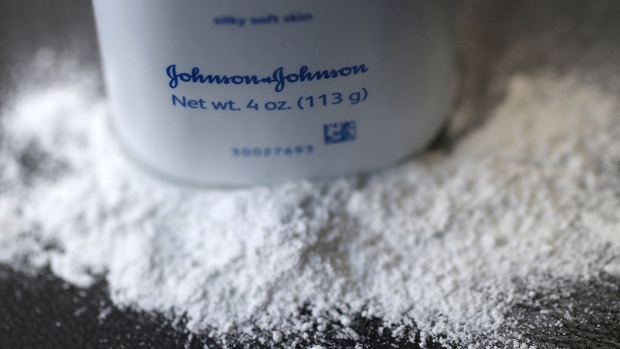 (Bloomberg) -- Johnson & Johnson wants a bankruptcy judge to immediately halt all lawsuits targeting the company over its talc-based powders in the wake of its controversial decision to put a newly created unit into bankruptcy to deal with the litigation. J&J’s lawyers asked U.S. Bankruptcy Judge Craig Whitley to order plaintiffs’ lawyers to stop litigating talc cases against the world’s largest maker of health-care products and all its subsidiaries while the unit proceeds with its Chapter 11 case. The company contends its adversaries are refusing to put their suits against J&J and some of its units on hold –- as required by federal law –- as part of a case consolidation before a federal judge in New Jersey. Bankruptcy statutes allow companies to get an “automatic stay” of cases immediately after a filing. “Permitting the continued piecemeal litigation of such claims in the tort system notwithstanding the automatic stay would undoubtedly interfere with, and potentially end, the Debtor’s reorganization case,” J&J’s lawyers said Monday in a court filing.

Leigh O’Dell, a plaintiffs’ lawyer who is one of the co-leaders of the talc cases consolidated in New Jersey, said in an interview Tuesday that she’s planning to oppose J&J’s request for a stay in both her case and the bankruptcy case. Plaintiffs contend cases naming J&J itself and other units who haven’t filed for Chapter 11 protection should proceed, O’Dell said.

Getting a litigation halt for companies not in Chapter 11 is a long shot for J&J, said Charles Tatelbaum, a veteran bankruptcy lawyer who isn’t involved in the case. “Such third-party stays are granted very rarely,” he said in an interview. “I’ve never seen one” granted before a hearing. J&J sought bankruptcy protection for its newly created LTL Management LLC subsidiary last week after arguing it was struggling to contain nearly 40,000 suits blaming its iconic baby powder and other talc-based products of causing cancer. The company wants to put $2 billion into a trust as part of the unit’s bankruptcy to resolve all current and future talc claims. The company, based in New Brunswick, New Jersey, noted in a court filing it paid $1 billion in legal fees over the last five years in the talc cases and dealt with inconsistent jury verdicts. J&J also paid about $3.5 billion in settlements so far to resolve talc cases, according to the filing.

A 2018 jury verdict out of state court in St. Louis ultimately forced J&J to pay $2.5 billion to 20 women who targeted its baby powder for their ovarian cancer. Both the Missouri Supreme Court and the U.S. Supreme Court refused to overturn the verdict. Whitley will hear the company’s litigation-halt request tomorrow in Charlotte at the J&J unit’s first-day hearing in bankruptcy court. He’ll also be asked to approve financing for the case and other organizational matters. The case is LTL Management LLC, 21-30589, U.S. Bankruptcy Court for the Western District of North Carolina (Charlotte).