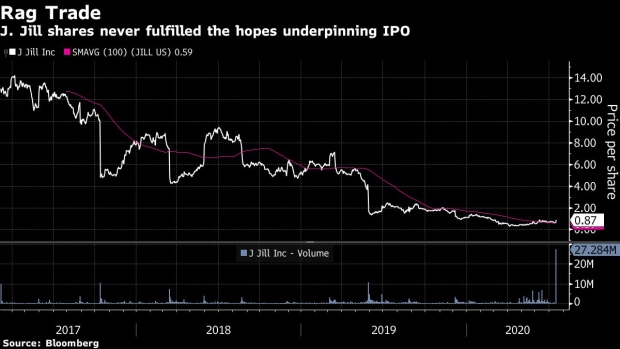 (Bloomberg) -- Even in a world of retail upheaval, J. Jill Inc. has had a more dramatic ride than most -- and that was before the pandemic.

Just three years after a highly anticipated initial public offering, J. Jill’s stock is flirting with zero and the company is trying to fend off bankruptcy. The women’s clothing chain warned its survival was in doubt a month ago after violating terms of its loans, and said Thursday its lenders extended a promise to hold off on taking action until next week.

J. Jill’s story illustrates how quickly the fortunes of a retailer can turn in the face of changing consumer habits, and now the onslaught of the coronavirus. Even before Covid-19 shut down most U.S. apparel stores, J. Jill was coping with net losses and defections by customers who spent more money at newer online merchants and less on clothing.

Creditors are owed about $270 million, and J. Jill’s new forbearance agreement with lenders gives the chain through July 23 to work out a solution. The company, which employed about 1,400 full-time and 2,300 part-time wrokers as of February, also said it would file its delayed quarterly report on July 31.

A representative for J. Jill didn’t respond to a request for comment. The company said in a news release that it’s still in “productive discussions with our lenders,” and that the new forbearance will give it time to complete negotiations.

This isn’t what investors and analysts envisioned after the company raised about $163 million through an initial public offering, which was backed by Bank of America Corp.’s Merrill Lynch, Morgan Stanley and Jefferies Group LLC. Shortly after its debut in March 2017, J. Jill garnered eight buy ratings and two holds from analysts intrigued by strong e-commerce sales and about 300 stores that specialized in fashion aimed at women 45 and over.

Within six months, the company missed forecasts in two consecutive quarters, and its shares plunged by almost half amid analyst downgrades. Some of those problems mirrored those of Chico’s FAS and Dressbarn, which serve some of the same customers.

“They’ve really struggled with bringing in any compelling fashion that the customer wants, and their customer has gone somewhere else,” said Gabriella Santaniello, founder of retail consulting firm A Line Partners.

J. Jill’s troubles continued, with disappointing third-quarter results last year that followed a $97 million loss in the previous quarter. In December, the company replaced Chief Executive Officer Linda Heasley with board member Jim Scully and began a search for a permanent CEO.

By then, the damage was done: The deficit came to $128.6 million for the fiscal year ended Feb. 1. And all this was before the coronavirus locked down the U.S.

J. Jill began as a store in the Berkshire mountains of Massachusetts in 1959, then grew into a catalog company. It’s now based in Quincy, about 8 miles outside Boston.

Forty years after its founding, it launched an e-commerce site and began to become a presence in American malls. But the turn of the century brought a procession of changes and new owners.

But it held on to J. Jill less than two years, selling a majority stake to Bahrain-based Arcapita Bank Bsc for an undisclosed sum in 2011. In turn, Arcapita sold the chain to TowerBrook Capital Partners for a reported $400 million in 2015, with the IPO about two years later.

The stock’s early performance was not particularly auspicious. After debuting at $13 in March 2017, it reached its all-time high of $14.40 early that April. Since then, it’s been mostly downhill, with the stock now at about 80 cents. Quotes on J. Jill’s term loan hover just above half of face value.

There has been some upbeat news, as J. Jill reported on June 15 that stores reopened after the pandemic performed better than expected -- though this predated the surge in U.S. cases that reversed or slowed re-openings for some merchants.

But overall, the company’s trajectory hasn’t followed the hopes for a retail good-news story built into its IPO.