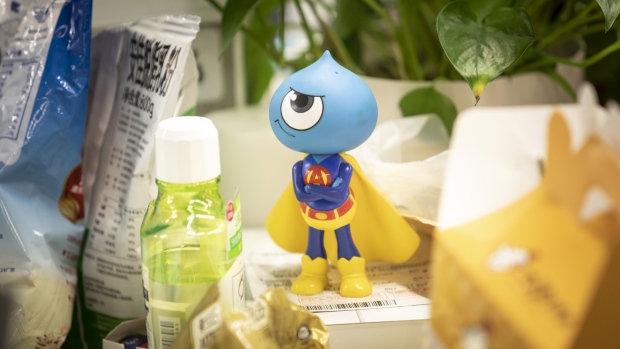 A toy figurine of the Ant Group Co. mascot sits on a desk at the company's headquarters in Hangzhou, China, on Monday, Sept. 28, 2020. Jack Ma's Ant Group is seeking to raise $17.5 billion in its Hong Kong share sale and won't seek to lock in cornerstone investors, confident there will be plenty of demand for one of the largest equity deals in the financial hub, according to people familiar with the matter. Photographer: Qilai Shen/Bloomberg , Bloomberg

(Bloomberg) -- Jack Ma’s Ant Group Co. won approval from the Hong Kong stock exchange for its initial public offering, clearing a key hurdle as the Chinese fintech giant races to complete the sale ahead of the U.S. election.

The Hangzhou-based company still needs to complete its registration with the Chinese securities watchdog for the Shanghai portion of the IPO, a person familiar said. The firm is seeking to raise $35 billion in the dual listing, with about half to be raised in each market, people familiar with the matter have said.

Ant’s IPO could become the world’s biggest, surpassing Saudi Aramco’s record $29 billion sale last year. It also will mark a win for the Hong Kong stock exchange that has lost many of China’s tech stars to U.S. exchanges, while bolstering the city’s status as a global financial hub as geopolitical tensions cast a shadow over its future.

“It looks like a very good deal, so people still have high enthusiasm for this IPO,” Shawn Yang, managing director at Blue Lotus Capital Advisors told Bloomberg TV, adding that the U.S. tension is not dampening interest. “Investors are more focused on fundamental issues like the growth and the competitive landscape. There are no obvious weaknesses for Ant at this point.”

The tech giant, a unit of billionaire Jack Ma’s Alibaba Group Holding Ltd., could have an IPO valuation of at least $280 billion, people familiar have said. That would make it bigger than Bank of America Corp. and three times the size of Citigroup Inc.

The Hong Kong approval means Ant may have enough time to list before the U.S. elections on Nov. 3, when some expect potential delays in counting postal ballots to create prolonged market uncertainty. The one-week gap in Hong Kong between the pricing of an IPO and the start of trading means investors would be left exposed to an increase in volatility if Ant doesn’t complete the IPO before the vote.

The Trump administration is exploring restrictions on Ant, as well as rival Tencent Holdings Ltd., over concerns that their digital payment platforms threaten U.S. national security.

Ant won’t seek cornerstone investors for Hong Kong, but will invite big backers for its Shanghai sale to mitigate price fluctuations, people familiar have said. The firm is planning to issue new stock equal to about 11% to 15% of its outstanding shares and split the float evenly between Hong Kong and Shanghai, the people added.

Cornerstone investors, more common in Hong Kong than in other markets, are usually large institutions that agree to hold the shares for about six months in exchange for a sizable allocation.

Ant picked China International Capital Corp., Citigroup Inc., JPMorgan Chase & Co. and Morgan Stanley to lead its Hong Kong offering, according to people familiar with the matter. CICC is leading the Shanghai leg of the IPO.