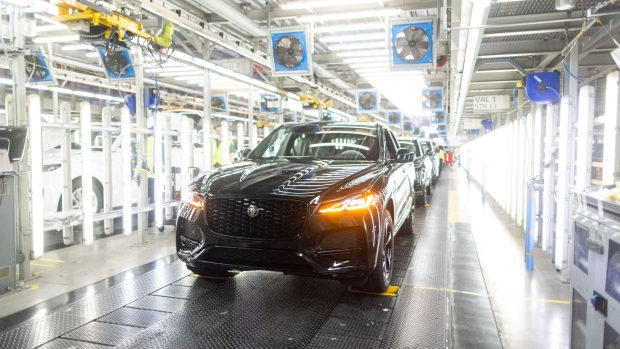 A Jaguar F Pace sports utility vehicle (SUV) at the end of the production line at Tata Motors Ltd.'s Jaguar Land Rover vehicle manufacturing plant in Solihull, UK, on Friday, Jan. 20, 2023. Tata Motors are due to report their latest results on Wednesday. , Bloomberg

The British luxury carmaker reported profit before tax of £265 million ($326 million) for the three months ending in December, compared with a £9 million shortfall a year earlier, Indian parent Tata Motors Ltd. said Wednesday. The gains were due to sales of the new Range Rover and Range Rover Sport models almost doubling, as well as positive currency effects.

“JLR has returned to profit as chip shortages eased in the quarter and production and wholesales increased,” Adrian Mardell, JLR’s interim chief executive officer, said in a statement.

The manufacturer has been badly hit by the protracted shortages of semiconductors that have crippled the entire industry. Earlier this month, JLR said it might miss a target of becoming net-debt free by next year as the supply-chain crisis crimped output. The struggles come before a backdrop of record vehicle orders of 215,000, JLR said Wednesday.

JLR is also facing the challenge of executing its EV strategy amid management upheaval. Thierry Bollore, who led the company for less than two years, announced his departure in November, with Mardell taking over in the interim.

On Wednesday, JLR said its Solihull plant in the UK will start making fully-electric Jaguar models from 2025 alongside Range Rover models “heralding an exciting new era of electric carmaking in the UK.” The nation’s automaking industry has made only limited headway in the EV transition with battery-building hopeful Britishvolt Ltd. filing for insolvency this month the latest blow. During the third quarter, the Jaguar nameplate sold just 14,500 cars.

JLR expects to achieve positive Ebit margin and free cash flow in the fiscal fourth quarter with wholesales of 80,000 units or more. The cost-cutting program is on track to deliver more than £1 billion in improvements in the year to help soften inflation. The manufacturer stuck to an expectation of achieving positive cashflow and positive returns for the full year.

Tata Motors CFO P.B. Balaji said he is “cautiously optimistic” as there is still a shortage of semiconductor supplies at JLR.

Overall, JLR’s wholesales in the third quarter jumped 15% from a year earlier to 79,591 vehicles. Wholesale volumes in China were hit by Covid restrictions — which have since been lifted — falling 13% from the previous quarter, with the situation expected to improve.

Tata Motors is planning to invest $2.2 billion in electric vehicles over five years with the company’s EV business well-funded, Balaji said, when asked whether the company is looking to raise fresh funds.