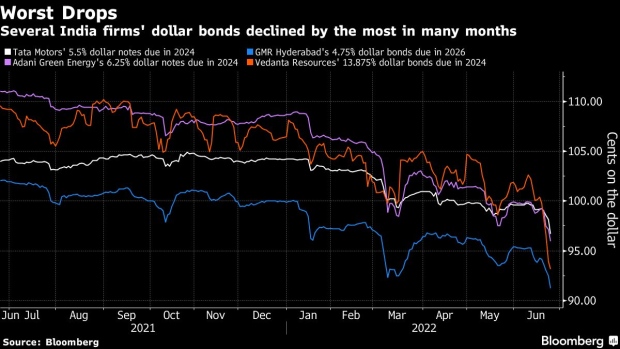 Signage for Tata Motors Ltd. is displayed on a sign outside the Prabhadevi Concorde Motors India Ltd. dealership in Mumbai, India, on Saturday, Nov. 5, 2016. Cyrus Mistry, the ousted chairman of India's biggest conglomerate, was replaced as Tata Sons chairman by his 78-year-old predecessor Ratan Tata at a board meeting on Oct. 24. Tata Sons said the conglomerate's board and Trustees of the Tata Trusts were concerned about a growing “trust deficit” with Mistry, which prompted the company to remove him. Photographer: Dhiraj Singh/Bloomberg , Bloomberg

(Bloomberg) -- The debt of Jaguar-owner Tata Motors and mining giant Vedanta Resources Ltd. suffered their biggest drop on record last week, among a handful of Indian companies whose bonds plummeted as the rupee sank to a record low.

Those drops coincide with the rupee touching its lowest against the dollar, making it more expensive for the Indian companies already facing the challenge of higher interest rates to service existing foreign debt or sell new bonds in another currency.

Higher US borrowing costs are dampening credit market across the region, with the Bloomberg index of investment-grade dollar bonds for Asia excluding Japan losing more than 10% so far this year.

“India bonds are declining in line with other Asian markets as market sentiment in general is weak,” said Eric Liu, credit desk analyst in Hong Kong at Nomura Holdings Inc. “A weak rupee is also one of the factors driving the fall in the nation’s credit.”

Offshore borrowing is restricted in India due to central bank rules designed to limit hot money flows. Issuers from the country accounted for just a fraction of the dollar bond deals in Asia this year.