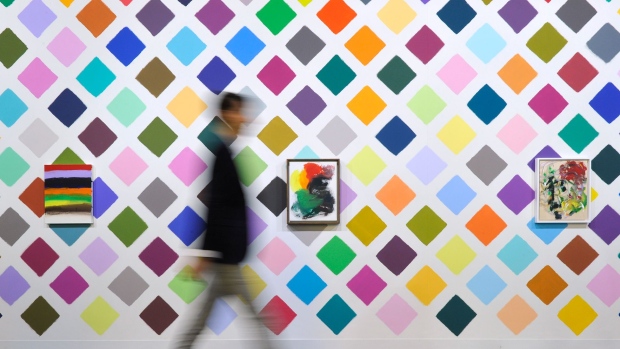 BASEL, SWITZERLAND - JUNE 18: A visitor walks past to the artworks by Martin Creed in the gallery section of Art Basel on June 18, 2014 in Basel, Switzerland. Art Basel one of the most prestigious art fair in the world, which runs until the 22nd of June 2014 will showcase the work of more than 4,000 artists selected by 300 leading galleries. (Photo by Harold Cunningham/Getty Images) , Photographer: Harold Cunningham/Getty Images Europe

(Bloomberg) -- James Murdoch plans to invest in ailing Art Basel organizer MCH Group, which has been hammered by delays and cancellations due to the coronavirus pandemic.

His investment company Lupa Systems will acquire a stake of 30% to 44%, Basel-based MCH Group said in a statement Friday. The company also plans to add Murdoch to the board of directors.

MCH Group has been battered by the coronavirus outbreak, which led to some of its biggest events being called off. The Art Basel show, slated for September, was canceled, and big-name brands like Rolex and Patek Philippe deserted its watch exhibition Baselworld, leading to the scrapping of the show. Sales will slump by as much as 170 million francs ($180 million) this year.

Lupa Systems is a technology and media fund founded by the younger son of billionaire Rupert Murdoch. It has acquired stakes in Vice Media and the Void, which focuses on virtual-reality entertainment. James Murdoch also got into business with Robert DeNiro to help the owner of the Tribeca Film Festival expand.

MCH Group will propose a 104.5 million-franc capital increase and a restructuring of its debt capital at an extraordinary general meeting on Aug. 3, which is when shareholders will vote on Lupa Systems’ entry as a new shareholder with a lock-up period of five years.