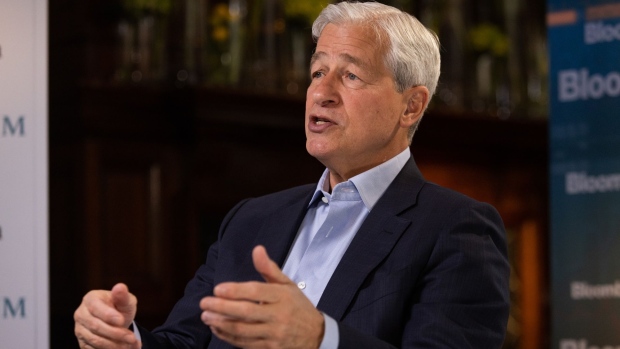 (Bloomberg) -- Jamie Dimon was handed a rare defeat from shareholders as they rejected a pay proposal, just months after the board unfurled lucrative incentives for the JPMorgan Chase & Co. chief to stay on for a number of years.

The pay packages for Dimon and other company leaders were supported by just 31% of shareholders, a tally announced at the bank’s annual meeting on Tuesday. The preliminary result marks the first time since 2009 -- when JPMorgan began seeking investor votes on pay -- that a majority of shareholders declined to back the firm’s measures.

The drubbing is a significant blow for the billionaire dean of Wall Street who was granted alongside his lieutenant Daniel Pinto special bonuses last year to ensure they stick around. Prominent shareholder advisers Glass, Lewis & Co. and Institutional Shareholder Services Inc. took particular umbrage to those awards, recommending investors reject the pay packages -- a move that can send a message of discontent not just with executive compensation but with the company’s performance too. JPMorgan’s shares are down about 23% this year, the worst performing among Wall Street giants.

The board of New York-based JPMorgan takes the shareholder feedback “very seriously” and will continue to engage with investors on pay, company spokesperson Joe Evangelisti said. The resolution was advisory, meaning that the vote is non-binding. Typically, shareholders overwhelmingly back company proposals, and the compensation proposal was the only such measure rejected at JPMorgan’s annual meeting.

Shareholder rejections of such resolutions can also lead to changes. Last year, rival Goldman Sachs Group Inc. reversed its stance on disclosing the effects of forced arbitration after a shareholder proposal the bank had opposed was backed by almost half of investors.

“That’s a very unusually low vote,” Alan Johnson, managing director of compensation consultancy Johnson Associates Inc., said in an interview of the JPMorgan tally. While the bank probably wasn’t shocked that some shareholders didn’t like its pay proposal, the results are “a little embarrassing.”

Since 2009, JPMorgan has largely received more than 90% support on compensation. Prior to Tuesday, the lowest level of approval was a 2015 resolution that won just 61% of support. At the time, the board said it would consider changes to compensation policies for top executives.

In opposing the JPMorgan executive-pay resolution for 2021, Glass Lewis noted that $52.6 million in option awards granted to Dimon, JPMorgan’s chairman and CEO, were “nearly double the size of his regular equity grant for 2021” and represented much of his $84.4 million in annual pay. The firm also criticized the $53.3 million in total compensation for Pinto which included almost $27.9 million in option awards.

“The board said it intended it to be a one-off award reflecting exemplary leadership,” Evangelisti said after the vote. “The award will not vest for five years, and Dimon would not be allowed to sell any vested shares for an additional five years. The special award was extremely rare -- the first in more than a decade for Mr. Dimon -- and it reflected exemplary leadership and additional incentive for a successful leadership transition.”

Pinto, 59, recently became JPMorgan’s sole president and COO after sharing those titles with Gordon Smith until Smith’s retirement at the end of last year. The pair served as acting co-CEOs while Dimon was sidelined by emergency heart surgery just as the coronavirus pandemic roiled markets. Pinto is widely viewed as the most likely replacement to Dimon, 66, in another emergency situation, but less likely in an orderly transition.

In response to a shareholder question Tuesday, Dimon said he feels “great” following the 2020 surgery. Whenever asked how long he will remain CEO, he’s long joked that he’ll stay for five more years. Dimon, who’s been at the helm since the end of 2005, defended his compensation last year, calling it part of a broader “umbrella” designed to retain senior management.