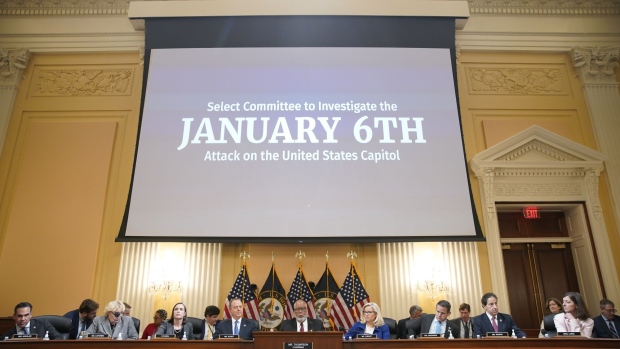 A hearing of the Select Committee to Investigate the January 6th Attack on the US Capitol in Washington, D.C., US, on Tuesday, June 21, 2022. The committee investigating the Jan. 6, 2021 insurrection at the US Capitol is set to outline aggressive efforts by former President Donald Trump and his allies to pressure state officials to help overturn Joe Biden's 2022 election. , Bloomberg

(Bloomberg) -- A House committee investigating the US Capitol attack is seeking to reclaim some of the spotlight lost to other blockbuster legal developments around Donald Trump with what could be its final hearing next week.

Committee Chairman Bennie Thompson told reporters Tuesday that a hearing scheduled for Sept. 28 would be the last for the committee, “unless something else develops.”

The panel is also planning to release an interim report of its investigative conclusions in early October, just weeks before the Nov. 8 elections that will determine control of Congress.

“It won’t be a quiet period,” Thompson, a Mississippi Democrat, said last week.

The panel will need to crank up the volume to regain attention seized by the FBI’s raid of Trump’s Mar-a-Lago estate in Florida and the dozens of subpoenas issued by federal and state grand juries. Since its last hearing, on July 21, the committee’s vice chair, Republican Liz Cheney, suffered a deflating primary loss to a Trump-backed candidate in Wyoming.

With the committee’s charter sunsetting at the end of the year, some of the loftier investigative pursuits  -- such as seeking testimony from the ex-president -- may simply run out of time. And efforts to enforce subpoenas served on Trump’s congressional allies will probably remain unresolved.

The panel does intend on continuing its gumshoe work as long as possible, and is not planning to release its final report until December. But such end-of-year timing risks delivering too much, too late, given that Republicans could simply ignore any legislative recommendations come January if they win the House majority.

Committee members are still deciding on the topic or topics of the Sept. 28 hearing, and whether live witnesses will be called. One idea is to focus on security lapses at the Capitol tied to Jan. 6 and the reasons for delays in deployment of the National Guard -- a subject explored already by other congressional committees.

Another would be to focus on Trump’s actions after the Jan. 6 insurrection. The hearing will be at 1 p.m., not in prime time as a few of the previous ones have been.

Thompson said the committee would go over some findings or conclusions that will be contained in the final report, as well as some recommendations. “We have substantial footage of what occurred and we have significant witness testimony that we haven’t used in other hearings,” he said.

While it is expected to be the final hearing, Thompson said that is not set in stone, “because things happen.”

The committee recently received a substantial tranche of additional subpoenaed material from the US Secret Service -- including chat messages and radio traffic among Secret Service personnel from Jan. 5 and Jan. 6, that could solve mysteries involving Trump’s interactions with his security detail on the day of the attack.

“We’re taking in documents every day, we’re working, we’re reading, we’re going to do our best to put together a product the United States House can be proud of in this final report that will have some historical significance,” said panel member Pete Aguilar, a California Democrat.

The final, full report is expected to be voluminous, jam-packed with testimony gleaned from more than 1,000 witnesses, while providing conclusions, exhibits and recommendations to enact new election protections and other reforms.

“And that’s not lost on any of us -- how important this work is to make sure that this doesn’t happen again and make sure we tell the full and complete story,” Aguilar said.

Undecided is whether there could also be referrals to the Justice Department recommending criminal prosecutions. Multiple grand juries in Washington and Georgia are already scrutinizing efforts to overturn the 2020 election.

In deference to the limited time left, there is less talk of the committee calling former Vice President Mike Pence or even Trump himself, to voluntarily testify, though that hadn’t been considered probable. It is also growing unlikely that several of Trump’s subpoenaed Republican allies in Congress will ever be forced to appear, or former White House Chief of Staff Mark Meadows and former deputy chief of staff Dan Scavino.

Even the committee’s plans to recommend reforms to the electoral counting procedures has found itself overtaken by events. Cheney and Zoe Lofgren, a Democratic panel member, introduced a bill this week to strengthen the Electoral College Act, which is endorsed by the committee.

The House passed the legislation Wednesday on a 229-203 vote. A similar bill is working its way through the Senate, and any final action to merge the two versions for final passage won’t happen until after the November midterm elections, in which there are at least 45 Republican candidates on the ballot for the House and Senate who have either said the 2020 election was stolen or cast doubt on its legitimacy.

“I want to be very clear that this is to prevent future attacks during election processes,” Cheney said of her bill during an appearance Monday evening at the American Enterprise Institute. But Cheney said no one should misconstrue efforts to overhaul the Election Count Act as suggesting that Trump did not violate existing law.

Panel members say they know that critics will accuse them of trying to affect the Nov. 8 election with the additional hearing and an early report, but insist they need to start releasing some committee information in coherent chunks that are digestible by the public.

“There are those partisans of former President Trump who will denounce anything we do. So, you know, we’re not going to jump through hoops to please people who will call whatever we’re doing partisan,” committee member Jamie Raskin, a Maryland Democrat, said.

(Updates with House passage of an election reform bill in 20th)