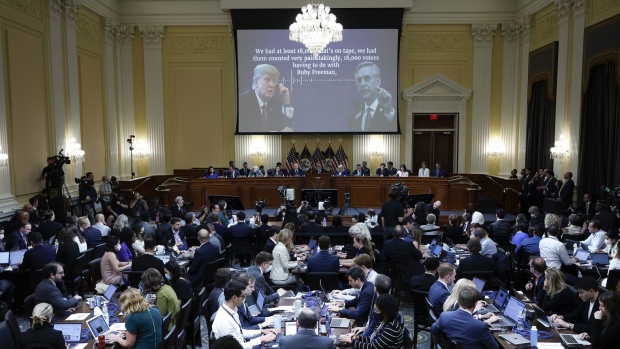 A transcript of a phone call between former U.S. President Donald Trump and Brad Raffensperger, Georgia's secretary of state, appears on a monitor during a hearing of the Select Committee to Investigate the January 6th Attack on the US Capitol in Washington, D.C., on June 21, 2022. , Photographer: Chip Somodevilla/Getty Images

(Bloomberg) -- The Jan. 6 committee resumes its public hearings Thursday with a focus on Donald Trump’s attempts to pressure top Justice Department officials to provide support for his claims of election fraud in battleground states that Joe Biden won.

The hearing promises first-hand accounts of a tense behind-the-scenes drama that culminated in an hours-long Sunday evening showdown in the Oval Office three days before the attack on the Capitol. Witnesses testifying live include Jeff Rosen, then the acting attorney general, and Richard Donoghue, then the acting deputy attorney general. Steven Engel, who headed the department’s Office of Legal Counsel, also is testifying.

More details are expected during Thursday’s hearing about the role the committee says Representative Scott Perry played in the efforts to install Trump ally Jeffrey Clark as acting attorney general -- including with the use of encrypted messages.

Chairman Bennie Thompson wrote in December the panel had “evidence from multiple witnesses” of the Pennsylvania Republican’s direct involvement in the push for Clark.

Among the intriguing teases in that December letter was that Perry engaged in some of those efforts by “using the encrypted Signal app” with Mark Meadows, who was Trump’s last chief of staff.

Perry has refused requests to sit privately for committee questioning, both voluntarily and under subpoena.

As the committee’s start time was approaching, news broke that federal investigators have searched the home of Clark, who played a key role in trying to help Trump overturn the 2020 election results, according to a person familiar with the matter.

Clark, who served as an assistant attorney general, has come up frequently during the House probe. Other former Justice Department officials have testified that they threatened to resign over Trump’s plan to name Clark acting attorney general and send a letter to the states saying election results were in doubt.