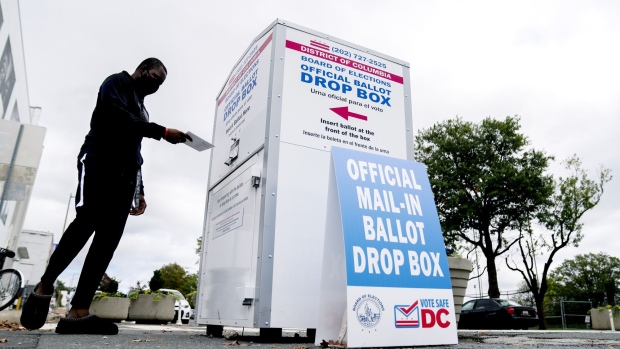 A voter wearing a protective mask deposits a ballot into an Official Ballot Drop Box in Washington, D.C., U.S., on Friday, Oct. 30, 2020. Early voting in the Presidential election reached 82 million ballots, almost 60% of the total turnout in 2016, according to the U.S. Elections Project. Photographer: Stefani Reynolds/Bloomberg , Bloomberg

(Bloomberg) -- Congressional investigators have spoken with former Attorney General William Barr about a reported draft executive order to use the National Guard to seize ballot boxes after the 2020 election, according to the chairman of a House panel investigating the Jan. 6 attack on the U.S. Capitol.

“We’ve had conversations with the former attorney general already,” Representative Bennie Thompson, Democrat of Mississippi, said on CBS’s “Face the Nation” on Sunday. “We have talked to Department of Defense individuals.”

Politico reported last week on a never-issued draft executive order dated Dec. 16, 2020, as the administration of former President Donald Trump debated its response to Joe Biden’s victory in the presidential election in November. It isn’t clear who wrote the document, according to Politico.

“We are concerned that our military was part of this big lie on promoting that the election was false,” Thompson said.

The Defense Department didn’t respond to a request for comment.

The December 2020 draft envisaged empowering the defense secretary to “seize, collect, retain and analyze all machines, equipment, electronically stored information, and material records required for retention” under a law on the preservation of election records, Politico reported.

While Thompson said there was no “operational plan” to put the order in place, the draft “is reason enough to believe that it was being proposed.”

“Our job is to get to the facts and circumstances of how far did they go,” he said.

The U.S. Supreme Court last week cleared the way for some of Trump’s White House papers to be turned over to the congressional committee, allowing the National Archives to hand over about 800 pages of material.