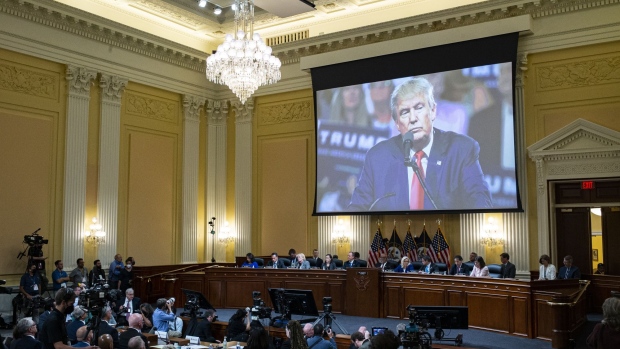 Former US President Donald Trump displayed on a screen during a hearing of the Select Committee to Investigate the January 6th Attack on the US Capitol in Washington, D.C., on June 21. Photographer: Al Drago/Bloomberg , Bloomberg

(Bloomberg) -- The Jan. 6 committee is pausing its public hearings after Thursday’s meeting as the House panel sorts through documentary footage and other new evidence that has surfaced concerning the attack on the US Capitol.

“We have a new documentary person that we’re talking to, and we’ve got to look through all of his information,” Committee Chairman Bennie Thompson told reporters, adding that he’s seen only some of the new evidence.

Thompson was referring to British documentary filmmaker Alex Holder, who tweeted on Tuesday that he received a subpoena from the committee to turn over footage he has of former President Donald Trump leading up to the Capitol assault. He said he is to be questioned by the committee behind closed doors on Thursday.

The hearings, once expected to conclude as soon as next week, will now extend into July. Congress is leaving at the end of this week for a two-week recess.

Other new evidence includes information received on the committee’s tip line and produced by the National Archives, Thompson said.

The delay comes as committee members have received an uptick in threats in the past 24 hours, and all lawmakers on the panel are likely to receive a security detail, the Washington Post reported.

The committee had previously said it anticipated holding seven hearings in June, and then another in the fall to release its final report. Thursday’s hearing -- to focus on Trump and White House pressure on the Department of Justice -- is its fifth.