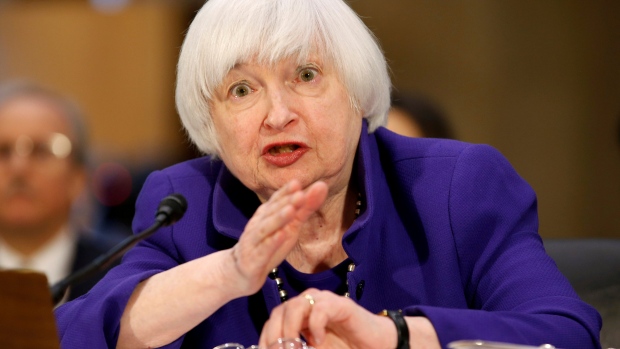 The U.S. Federal Reserve's long-stalled 'liftoff' of interest rates may finally get airborne this year as policymakers from Chair Janet Yellen on Friday to regional leaders across the United States signaled that the era of easy money is drawing to a close.

Yellen capped off a seemingly coordinated push from the central bank on Friday when she cemented the view that the Fed will raise interest rates at its next meeting on March 14-15, and likely be able to move faster after that than it has in years.

It's a welcome turn for the Fed chair, who has hoped to get rates off the ground throughout her three-year tenure, and now sees the economy on track and investors aligned around the idea.

"At our meeting later this month, the committee will evaluate whether employment and inflation are continuing to evolve in line with our expectations, in which case a further adjustment of the federal funds rate would likely be appropriate," Yellen said at a business luncheon in Chicago.

"The process of scaling back accommodation likely will not be as slow as it was in 2015 and 2016," she added.

Stocks were up slightly, and futures tied to rate-hike expectations moved little on Yellen's remarks. The comments from Fed speakers this week had already pushed market pricing of a March hike to 80 per cent.

The Fed has struggled for the past three years to raise interest rates off the zero lower bound as the U.S. economy slowly healed after the Great Recession. Issues from sluggish inflation globally to the dampening effect of a strong dollar and low energy prices blew them off course.

By contrast, 2017 may be the year the Fed is able to follow through on its forecast of three rate hikes.

"For the first time in a long time I think the risk of more rate hikes is a bit higher than the risk of fewer rate hikes," said Roberto Perli, an economist with Cornerstone Macro LLC.

Among Fed officials, even Fed Governor Lael Brainard, one of the strongest voices arguing that the central bank should not move rates too high until economic conditions improved overseas, appeared on board this week.

At 1.7 per cent euro zone growth in 2016 nearly matched the United States, corporate profits are strong and inflation in February was near the European Central Bank's target – all evidence that the single-currency zone had avoided a dangerous deflationary spiral.

And while Yellen on Friday was quick to point out that the Fed's closeness to its goals of full employment and 2 per cent inflation were currently guiding its rate hike plans, others pointed to further upside risks from economic programs proposed by President Donald Trump.

"If you look at what's been happening to the economy since November 8 (election) ... and to the asset markets, and if you take into account the operation of what people of my age call 'animal spirits' ... you will realize that there has been a substantial wealth effect in this economy," said Fed Vice Chairman Stanley Fischer in a separate appearance on Friday.

Combined, the Fed commentary prompted an increase in the expected federal funds rate and Treasury yields of a size unusual outside of disruptive events like the "taper tantrum" of 2013, when former Chairman Ben Bernanke's indication the Fed was about to scale down its crisis-era bond purchase program sparked a global market reaction.

The breadth and consistency of the Fed's statements seemed to suggest a deliberate effort to shift markets in line with what policymakers see as the new reality - a stronger world economy, steady U.S. growth, and the possibility of fiscal and tax plans that may edge inflation and growth even higher.

The Fed's 12 regional bank presidents set their own speaking schedules and are responsible for their own remarks. But they are reading the same data.

Asked about any deliberate messaging, Fischer said in New York that, "If there has been a conscious effort (to raise expectations for a rate hike) I'm about to join it."