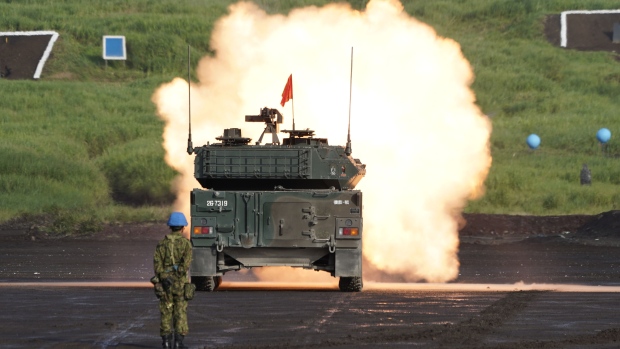 A Japan Ground Self-Defense Force (JGSDF) Type 16 mobile combat vehicle fires ammunition during a live fire exercise by the JGSDF in the Hataoka district of the East Fuji Maneuver Area in Gotemba, Shizuoka Prefecture, Japan, on Thursday, Aug. 22, 2019. The annual exercise by the JGSDF at the foot of Mount Fuji will continue on Aug. 24 and 25. , Bloomberg

(Bloomberg) -- Japan’s cabinet approved a record defense budget of 5.3 trillion yen ($48.5 billion), up about a percentage point from the previous year, amid renewed threats from neighboring North Korea.

Among the items on the country’s shopping list is 11.1 billion yen for developing a new-generation fighter plane, according to documents distributed by the Ministry of Defense.

The total also includes 28.1 billion yen for three Lockheed Martin F-35A warplanes. The ministry plans to have them assembled domestically, reversing a cabinet decision made last year to import completed F-35As from the U.S. Constructing the planes in Japan will save 40 million yen per unit, according to a Defense Ministry official.

The government will set aside 200.5 billion yen in financial support for the roughly 50,000 U.S. military personnel based in Japan. The agreement with the U.S. on host-nation support expires in March 2021 and President Donald Trump is pressing for a hike in contributions, which some reports say will be as much as four-fold. Japan has denied the reports.

To contact the editors responsible for this story: Brendan Scott at bscott66@bloomberg.net, Kana Nishizawa, Gearoid Reidy