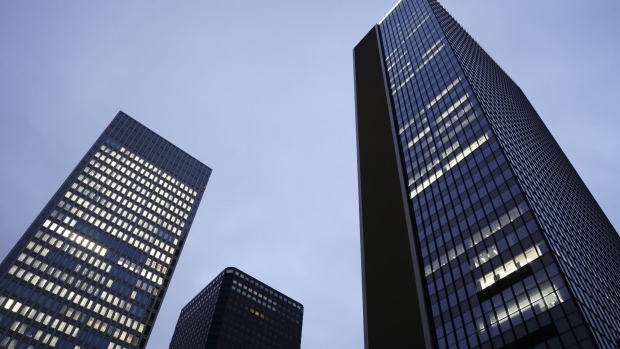 The World Trade Center Building South Tower, right, which houses the Orix Corp. headquarters, at dusk in Tokyo, Japan, on Tuesday, Oct. 19, 2021. The Bank of Japan and Financial Services Agency are assessing if local financial institutions have any remaining Libor-linked contracts that will be difficult to shift to alternative interest rates before the benchmark expires. Photographer: Kiyoshi Ota/Bloomberg , Bloomberg

(Bloomberg) -- The chief of Japan’s banking industry lobby group is calling on the nation’s central bank to pay closer attention to the adverse impacts of its ultra easy monetary policy after the yen plunged to a 24-year low.

“I think it’s important to take a balanced policy approach by considering merits and side effects,” Japanese Bankers Association Chairman Junichi Hanzawa said in an interview. “I am hoping the Bank of Japan will make an appropriate judgment.”

Hanzawa, chief executive of MUFG Bank Ltd., took over the annually rotating position at the industry group this month. The association, which represents more than 100 banks in Japan, is often reluctant to publicly voice grievances on positions of public policy.

While Hanzawa said the BOJ has been successful in its original intentions to pull Japan out of a deflationary trend, he says it’s time to weigh other factors.

“The current situation needs attention, as we are feeling a downward pressure on yen as a result of US and European central banks moving toward policy normalization,” he said. “I hope the BOJ will closely examine the current economic situation at home and overseas and set targets accordingly.”

Japan’s key inflation gauge remains above the BOJ’s target level of 2%, with energy costs amplified by a weaker yen. That’s likely to keep speculation alive over future potential policy adjustments at the central bank. For lenders, where profits have been squeezed by low interest rates for years, any tweak in policy would be paramount.

Hanzawa said the current inflation in Japan is driven by cost-push pressures not accompanied by wage increases. “There is a concern that it will become a burden on Japanese economy if it persists,” he said.