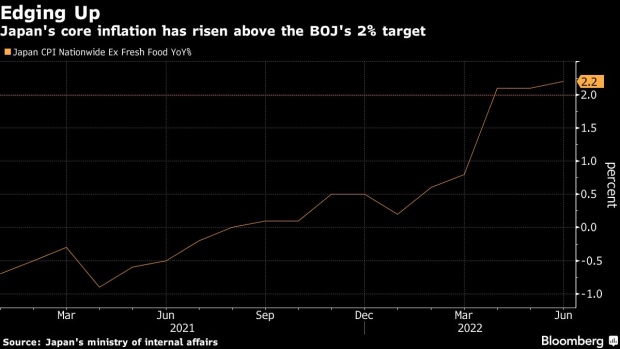 (Bloomberg) -- Japan’s cabinet reshuffle is likely to keep the central bank’s monetary easing intact while the government may do more to ease the pain of rising prices for households, according to economists.

“With this reorganization I’ve tried to make sure that the fundamental parts of policy are preserved,” Kishida said at a news conference after the new lineup was confirmed. “By newly adding ministers with experience and ability, we should be able to become a cabinet of decisive action.”

As a result of the reshuffle, economists expect the Bank of Japan to keep rock-bottom interest rates to support the economy, while a resurgence of coronavirus infection cases threatens its fragile recovery.

“The government will likely continue existing measures to support the Covid-hit economy and there’s unlikely to be major changes to the policy direction,” said Harumi Taguchi, principal economist at S&P Global Market Intelligence. “BOJ policy itself is unlikely to shift much, either, because of the need for continuity.”

The overhaul comes at a time when Kishida’s support rate is falling. Following former leader Shinzo Abe’s murder last month, some members of Kishida’s ruling party have come under scrutiny for ties to the Unification Church. Police said the suspected killer cited a grudge over the ex-premier’s ties to the group, which he blamed for bankrupting his mother, as a motive for the shooting.

The Unification Church -- long accused by critics and former followers of shady finances and policies that empty the pockets of members -- has been a focus of attention since the former prime minister was gunned down.

Kishida is likely looking to firm up public support with the cabinet reshuffle. He said at the news conference that he has no personal connection with the Unification Church that he knows of and picked only ministers who agreed to review any ties with the group.

The prime minister has pledged to do more to keep a lid on inflation after his ruling party scored a decisive victory in a national election last month for the upper house of parliament. Climbing prices of daily necessities like food and gasoline have been hitting households as Russia’s war in Ukraine has led to supply disruptions and a spike in energy and commodity prices.

The continued increase in Covid-19 cases and rising prices are also weighing on consumer sentiment.

Analysts see the BOJ sticking to its current easing policy framework at least until Governor Haruhiko Kuroda’s term ends in April. The terms of his two deputies are also set to expire in March. A recent rebound in the yen leaves room for the BOJ to keep up its easing program, too, which was criticized for contributing to the Japanese currency’s slide to a 24-year low against the dollar.

By retaining Suzuki as finance minister, Kishida seems inclined to name an advocate of monetary easing to replace Kuroda, according to Yoshimasa Maruyama, chief market economist at SMBC Nikko Securities. Suzuki already collaborates closely with the central bank on economic policy, and has expressed support for the 2013 joint statement between the government and the BOJ -- a backbone for current policy.

“Kishida has fought the upper house election saying monetary easing will stay and I don’t think there will be much disagreement over the policy stance,” Maruyama wrote in a note on Monday. He added that given the cabinet changes now, nominations for the next BOJ governor and two deputies could also come earlier than previously thought, possibly by the end of this year.

In addition to keeping an eye on the yen and its impact on the economy, Suzuki will face mounting pressure to restore the nation’s fiscal health after a series of pandemic-induced stimulus packages. Kishida also plans a substantial increase in defense spending in the wake of rising geopolitical tensions. For now though, Kishida said that spending will be first funded by existing reserve funds before anything extra is considered.

Defense Minister Nobuo Kishi, who is in poor health, was replaced by Yasukazu Hamada, taking a high-profile post away from Abe’s faction within the long-ruling Liberal Democratic Party. Hamada, who has previously served in the post, will be charged with managing the promised increase in defense spending and overhaul of the country’s national security strategy. Kishi, however, stays on as a national security adviser to Kishida.

Trade minister Koichi Hagiuda shifted to become party policy chief and his successor is cabinet veteran Yasutoshi Nishimura. Both men are members of the Abe faction.

In a cabinet that is usually 20-strong, the total number of women remains at two following the reshuffle. Sanae Takaichi, Kishida’s hawkish former rival for leadership of the LDP, re-enters the cabinet as minister for economic security, while Keiko Nagaoka becomes the new education minister.

Seiko Noda, the minister in charge of tackling the falling birthrate and regional revitalization, leaves the cabinet, and her roles will be divided between two men. Digital Minister Karen Makishima, the other woman previously in the cabinet, was also replaced by a man, Taro Kono.