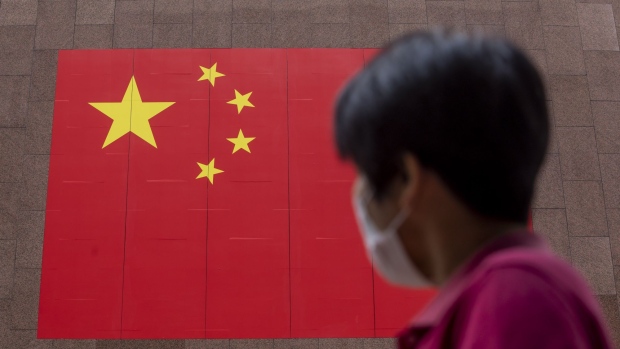 A pedestrian wearing a protective mask walks past a Chinese national flag displayed outside a hotel on National Day in Hong Kong, China, on Thursday, Oct. 1, 2020. , Paul Yeung/Bloomberg

​Tensions between Asia’s biggest economies worsened this week as Japan intensified criticism of China in a government report as an international security threat and a Chinese Foreign Ministry official taunted Japan over its handling of the Fukushima nuclear disaster.

The Japanese government for the first time described China as a source of “strong” concern in terms of security for the global community in its so-called diplomatic Blue Book, the Nikkei newspaper said on Tuesday. Japan’s Foreign Ministry in the annual report also for the first time referred to activities by Chinese government vessels around disputed East China Sea islands as a breach of international law, the paper said.

The Blue Book added to friction between the neighbors, which has worsened in recent months as Tokyo has joined the U.S. and Europe in criticizing China over human rights in Hong Kong and Xinjiang, as well as over security issues. It also led to a rebuke from Beijing.

“The Blue Book hypes up the China threat, smears China and interferes in China’s domestic affairs,” Foreign Ministry spokesman Wang Wenbin said at a regular press briefing in Beijing on Tuesday. He added that “we firmly oppose that and have lodged solemn representation with the Japanese side.”

Japan’s Defense Ministry used its annual security white paper released in July to condemn Chinese actions in the region, accusing Beijing of “relentlessly” pushing its way toward uninhabited East China Sea islands claimed by the two countries and saying it was becoming a “matter of grave concern.”

In his briefing, Wang described the islands -- known as Senkaku in Japan and Diaoyu in China -- as China’s inherent territory. “We urge Japan to redress these mistakes and build a stable China-Japan relations with concrete actions,” Wang said.

Japan also protested to the Chinese government over a tweet from one of its Foreign Ministry officials this week. The social media post adapted one of Japan’s most iconic works of art -- Hokusai’s “The Great Wave Off Kanagawa” -- to show people in protective gear disposing of radioactive water in the sea.

An illustrator in #China re-created a famous Japanese painting The Great Wave off #Kanagawa. If Katsushika Hokusai, the original author is still alive today, he would also be very concerned about #JapanNuclearWater. pic.twitter.com/NlTFkqvwmN

If the artist were still alive, he would be concerned about Japan’s plan to dispose of water from its crippled Fukushima nuclear plant at sea, Zhao Lijian said in the tweet. China is among the countries that have criticized the move, which the U.S. and the International Atomic Energy Agency have backed.

At a Wednesday briefing in Beijing, Zhao defended the tweet, saying “the picture reflects the righteous call of the people. It is the Japanese government that needs to revoke the wrong decision and apologize.”

Foreign Minister Toshimitsu Motegi told reporters Tuesday that Japan had made a stern protest over the tweet and asked for it to be taken down. Administrative Reform Minister Taro Kono, who has previously used face coverings to send a diplomatic message, on Wednesday sported a Hokusai-print mask.

China has repeatedly pressed Tokyo not to align itself too closely with the U.S., Japan’s only formal military ally. China was high on the agenda when U.S. President Joe Biden hosted Japanese Prime Minister Yoshihide Suga at the White House earlier this month, Biden’s first in-person meeting with a foreign leader since taking office in January.

Japan’s Motegi is also set to attend the meeting of Group of Seven Foreign Ministers in London from May 3-5, at which concerns over China are expected to be a major topic of discussion.

Japan has continued to indicate it values economic ties with its biggest trading partner. It has avoided imposing trade sanctions on China and on Wednesday parliament approved the 15-member Regional Comprehensive Economic Partnership on Trade, Japan’s first trade deal to include its giant neighbor.

--With assistance from Colum Murphy, Karen Leigh and Lucille Liu.