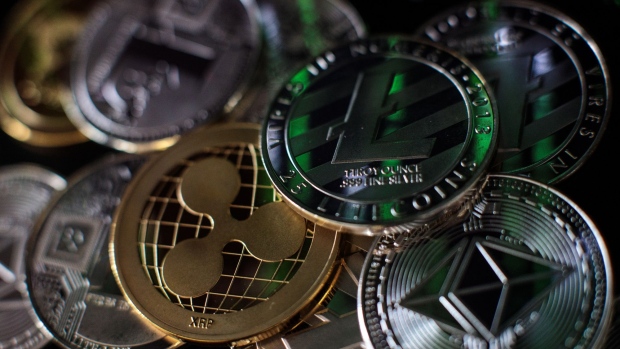 LONDON, ENGLAND - APRIL 25: In this photo illustration of the litecoin, ripple and ethereum cryptocurrency 'altcoins' sit arranged for a photograph on April 25, 2018 in London, England. Cryptocurrency markets began to recover this month following a massive crash during the first quarter of 2018, seeing more than $550 billion wiped from the total market capitalisation. (Photo by Jack Taylor/Getty Images) , Photographer: Jack Taylor/Getty Images Europe

The Japan Virtual and Crypto assets Exchange Association, which oversees digital coin listings, has held discussions about letting local exchanges list cryptocurrencies without going through its screening process, according to people with knowledge of the matter.

In a shift from its current stance, the self-regulatory body would focus on policing the assets once they are listed instead of being involved in the listing process, the people said, asking not to be identified because the talks are private. It’s also looking at whether member exchanges should be forced to delist digital tokens should problems arise after they start trading, they said.

An easing of the rules would mark a dramatic liberalization for Japan’s market for cryptocurrency trading and could be a potential boost for foreign newcomers like Coinbase Global Inc. that have broader knowledge of tokens than local firms. The US company offers more than 100 coins at home, compared with GMO Coin Inc. -- one of Japan’s largest crypto firms -- which has 21 cryptocurrencies listed.

The new measures wouldn’t apply to initial coin offerings, the people said. The JVCEA aims to make a final decision on whether to change the rules by the end of the year, they said.

In May, a government panel on which Kishida sits criticized the listing process for coins, saying “the certified self-regulatory organization tends to spend a long-time pre-screening” crypto assets and that it would “ease the criteria while being mindful of the need to protect users.”

An FSA official who asked not to be identified due to the agency’s policy said the regulator is aware the JVCEA is discussing a response to Kishida administration’s call for a simpler screening process, but that it’s not clear what recommendations it will come up with and whether the FSA will approve them. A representative for JVCEA wasn’t immediately available to comment.

A legal requirement for crypto exchanges to report any plans to list new tokens to the regulator will likely remain even if the screening process gets dropped, a person with knowledge of the matter said.

Earlier this year, the JVCEA introduced a greenlist of cryptocurrencies that member exchanges could list in one go. Before then, a token listing often had to go through a screening process that could take six months or longer, causing some companies to complain that it was hurting growth, the people said.

The current process for approving new listings applies to coins that are not on the JVCEA’s greenlist, large or small, although the organization has been working to shorten the time it spends on screenings, according to the people.