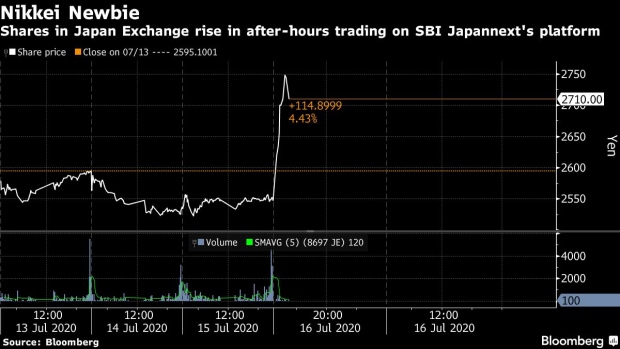 The operator of the Tokyo and Osaka exchanges will join the blue-chip index on July 29, Nikkei Inc. announced on Wednesday. SMS Co. Ltd will replace Sony Financial on the Nikkei 500 index. The outcome comes after Sony Corp.’s tender offer for its financial unit set in motion an opening for a coveted slot in the gauge in May.

When a component of the Nikkei 225 is delisted or removed, Nikkei Inc. generally replaces it with a stock from the same sector that has high liquidity. The reshuffle typically triggers moves in potential replacements, with funds tracking the index needing to buy and sell to reflect the changes, and speculators moving to profit in advance of that requirement.

Japan Exchange shares jumped as much as 7.9% in after-hours trading on SBI Japannext Co.’s platform, which has little liquidity with only 2,300 shares traded.

Nikkei’s announcement comes earlier than usual, after a tweak to its rules that allowed it to name the replacement stock once the likelihood of the existing stock on the index being delisted was “extremely high.” Sony announced on Tuesday that its tender offer for Sony Financial had been successful.

With the rules ambiguous enough to create multiple possibilities for replacements, a reshuffle can see outsized moves in those candidates. Japan Exchange shares rose in May along with financial sector stocks such as SBI Holdings Inc. and Monex Group Inc., all of which had been mentioned by analysts as possible candidates.

Japan Exchange was the pick of Daiwa Securities analyst Junichi Hashimoto in a May report. “We expect its addition in a nonperiodic change would generate buying demand of about 26 million shares,” he wrote, based on a deemed par value of 50 yen.

The change is not the only one set to shake up the index this year. Trading house Itochu Corp.’s plans to buy out its convenience store chain FamilyMart Co. will also free another slot once the deal goes through. Possible contenders to replace it include price-comparison site operator Kakaku.com Inc., online mall Zozo Inc., and drinks maker Suntory Beverage & Food Ltd.

The tender offer for FamilyMart is slated to run until August 24, assuming it doesn’t meet regulatory or investor opposition. Given the timeline, the chain’s replacement may come during the Nikkei 225 periodic rebalancing, typically announced in early September, which could allow for further sector rebalancing.