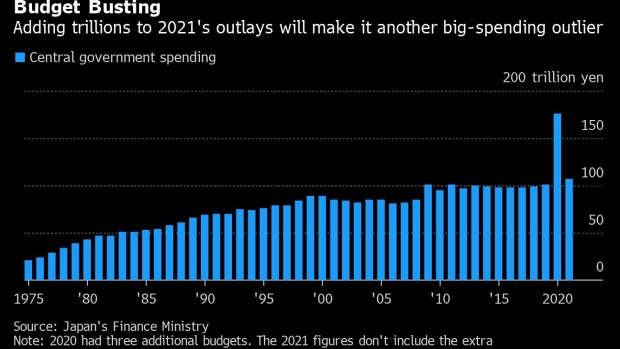 (Bloomberg) -- Japanese Prime Minister Yoshihide Suga is likely to unveil another economic stimulus package worth at least $180 billion within the next few months, according to a Bloomberg survey.

All but one of 18 surveyed economists said the announcement would come before national elections that must be held by early fall. The median forecast was for a package of between 20 trillion yen and 30 trillion yen.

The new spending would come as Suga looks to shore up support amid widespread dissatisfaction with his handling of the virus and a vaccine rollout that’s lagged other developed nations. Over the weekend, Tokyo voters chose not to give the ruling coalition a majority of the city’s assembly seats, a decision seen as a harbinger of what could come later in national elections.

Economists estimated the new stimulus package would be funded by an extra budget of between 10 trillion yen and 15 trillion yen, financed with 7.5 trillion yen in new government bonds.

The survey didn’t ask analysts to specify where the remaining stimulus money would come from, but Japan typically includes contributions from private businesses to inflate the headline size of its packages.

Japan’s economy is seen as having barely eked out growth last quarter amid stop-and-go restrictions to contain outbreaks. But with the country’s vaccine drive now gaining pace, most analysts see the government focusing its new spending on post-Covid growth measures, rather than more virus fighting.

The new spending would follow three extra budgets already drawn up during the pandemic that added about 70 trillion yen to Japan’s debt pile.