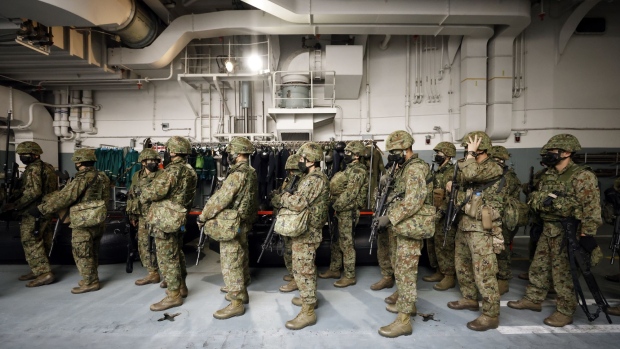 Members of the Japan Ground Self-Defense Force (JGSDF) prepare to board a Japan Maritime Self-Defense Force (JMSDF) Landing Craft Air Cushion (LCAC) from the JMSDF JS Kunisaki tank landing ship during a joint exercise by the Japan Self-Defense Forces (JSDF) off the coast of Tanegashima island in Kagoshima, Japan, on Thursday, Nov. 25, 2021. Japan has openly expressed concerns about tensions across the Taiwan Strait and their effect on regional security. , Bloomberg

(Bloomberg) -- Japan is planning its biggest-ever allocation to defense spending in an extra budget, as it seeks to speed up missile defense projects with China tensions simmering.

The cabinet Friday approved a request of 774 billion yen ($6.8 billion), part of which is brought forward from the planned budget for next financial year.

Japan’s relations with China have turned increasingly testy since Beijing’s clampdown on Hong Kong, and Tokyo has openly expressed concerns about tensions across the Taiwan Strait and their effect on regional security.

The extra defense spending comes after the Defense Ministry requested a record 5.5 trillion yen budget for the financial year starting in April, a move that sparked criticism from China. Next year’s budget is set to be finalized at the end of the year, and may be trimmed after some items were front-loaded.