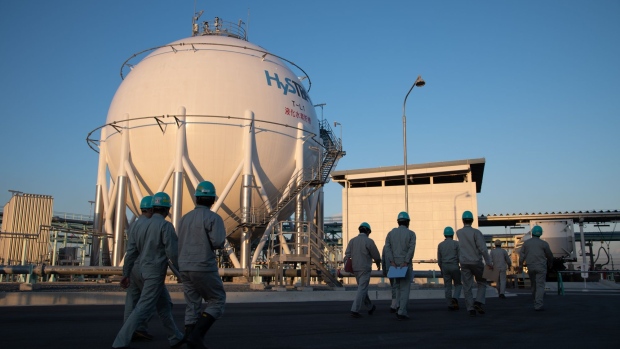 Digesters at the Higasinada sewage treatment plant in Kobe, Hyogo Prefecture, Japan, on Monday, Oct. 26, 2020. Japan will have to accelerate the closure of coal plants and ramp up renewable energy capacity over the next decade to meet Prime Minister Yoshihide Suga’s pledge to be emissions neutral in 30 years. Photographer: Akio Kon/Bloomberg , Bloomberg

(Bloomberg) -- Tucked into a port in western Japan sits a spherical tank that may soon hold the country’s energy future.

The import terminal in the city of Kobe, is slated to get its debut hydrogen shipment in March. Over the next 30 years deliveries of the zero-emission fuel are expected to ramp up exponentially as the world’s fifth-biggest polluter seeks ways to replace its heavy fossil fuel use and meet a pledge to become greenhouse gas neutral by 2050.

The monumental shift would require Japan to import the fuel using an armada of specialized tankers, according to Kawasaki Heavy Industries Ltd., the tank owner and the country’s only developer of a hydrogen supply chain. It would also represent a shot in the arm for the nascent industry, which BloombergNEF estimates could meet almost a quarter of the world’s energy needs by mid-century.

“Hydrogen is indispensable for Japan to reach the zero-emission goal,” Motohiko Nishimura, the head of KHI’s hydrogen project development center, said in an interview in Kobe, where the company is based. “Renewable energy alone isn’t enough to meet the nation’s hefty energy needs.”

While many countries are building out wind, solar and batteries as they intensify efforts to move away from fossil fuels in the fight against climate change, that is a challenge in densely populated Japan.

Hydrogen offers the greatest potential to decarbonize difficult-to-abate sectors like steel, cement and heavy duty transport, according to BNEF. That could be especially critical as the world’s fifth-largest greenhouse gas emitter embarks on its pathway toward net-zero emissions.

To be sure, hydrogen poses somewhat of a dilemma in the clean-energy transition as it is still cheaper to produce from fossil fuels rather than from renewable energy. However, the European Union and South Korea are betting on hydrogen generated from renewables to become more economical as solar and wind costs fall.

Investment of as much as $425 billion would be needed if hydrogen is to account for 40% of Japan’s energy needs, said Shin Furuno, a senior manager with Asia Investor Group on Climate Change. He based the estimate on an extrapolation of South Korea’s hydrogen roadmap, which sees investment of $136 billion for the fuel to reach a 20% share of its energy requirement by 2050.

The shift to hydrogen would be an echo in resource-poor Japan’s development of the liquefied natural gas industry more than 50 years ago through large investments in import infrastructure and by being a key buyer for numerous export projects.

“It won’t take decades” for the hydrogen industry to develop, like it took for LNG, Jochen Eickholt, an executive board member at German technological behemoth Siemens Energy AG, said in an interview in Singapore. “But it won’t happen overnight.”

KHI is eager to get the ball rolling. The company is creating a global supply chain -- producing hydrogen from brown coal in Australia, building ships and storage tanks as well as hydrogen-fired generation facilities for power and heat.

To be carbon-neutral in 2050, Japan will have to import 36 million tons of liquefied hydrogen, more than 100 times its projected imports in 2030, when commercial use of the fuel in the nation is expected to start, KHI’s Nishimura said.