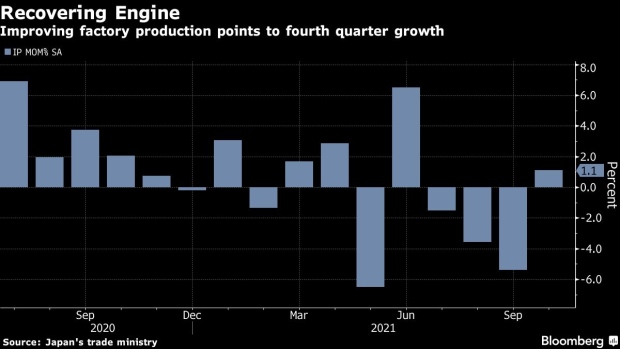 (Bloomberg) -- Japan’s factory production edged up in October, ending a three-month slide and adding to signs that the global supply chain crunch may have been easing before the emergence of the omicron variant of the coronavirus.

Higher output of cars and factory equipment lifted overall production 1.1% from September, the economy ministry reported Tuesday. Manufacturers said they plan to boost output again this month and next, a good sign for Japan’s recovery this quarter. Analysts had expected a 1.9% increase in October.

A separate report showed continued resilience in the labor market, with the unemployment rate ticking down to 2.7% and a measure of demand for workers showing positions on offer still outnumbering job seekers.

While Japan’s manufacturing gains and positive production forecasts offer more evidence that Asia’s supply chain shortages may be easing, the omicron variant of the coronavirus has reignited fears that a worst-case scenario could necessitate a return to growth-crippling lockdowns.

Japan on Tuesday closed its borders to new foreign arrivals, a move coming only weeks after the country managed to loosen restrictions amid plummeting case counts.

“If omicron is found within Japan and triggers more restrictions, it could shift the recovery trajectory, but so far that doesn’t seem to be happening,” said economist Atsushi Takeda at Itochu Research Institute. “September appears to have been the bottom for production.”

Economists Game Out How Omicron Will Hurt the Global Recovery

Bank of Japan Governor Haruhiko Kuroda on Monday said he expects Japan’s economy to return to growth in coming months, signaling that the emergence of omicron hadn’t changed his outlook much. Analysts have been forecasting Japan’s recovery to resume this quarter, now that restrictions on the service sector have mostly been lifted and the vaccination rate is above 75%.

“We expect production to accelerate in November, spurred by a gradual recovery in factory operating rates as a drop in virus cases in Asean starts to ease supply chain problems. Still, shortages of chips may remain a drag. China’s slowdown is also likely to continue weighing on exports and production.”

Reports from Toyota Motor Corp. show the group raised domestic output by about 22% last month, although the automaker’s global output is still down by more than a quarter from 2020’s level.

Manufacturers surveyed in Tuesday’s report said they plan to increase output 9% this month and another 2.1% in December, but the reported plans tend to be overly optimistic and the survey was taken before omicron was discovered.

Semiconductor supplies also continue to be a problem. Nissan Motor Co. President Makoto Uchida, in an interview with Bloomberg Television this week, said the company had expected to recover from the shortages in the second half of the fiscal year, but he’s less optimistic now. The firm this month cut its sales plan for the current year by 600,000 units due to continuing parts shortages.