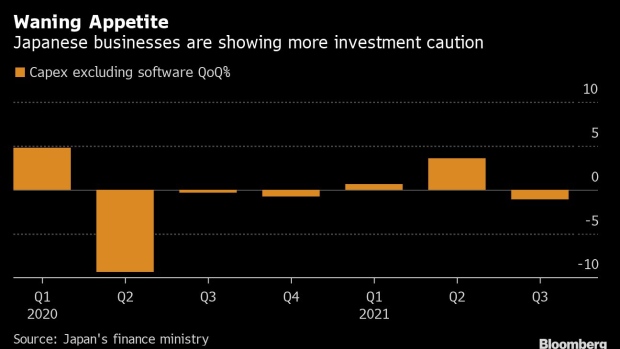 Pedestrians cross an intersection in the Shibuya district of Tokyo, Japan, on Saturday, Oct. 9, 2021. In Japan, vaccinations rates are up, infection case are way down, and the emergency lifted at the start of October. Thats boosting optimism that spending may rebound in coming months as new Prime Minister Fumio Kishida launches his administration. Photographer: Toru Hanai/Bloomberg , Bloomberg

(Bloomberg) -- Japanese firms cut investment last quarter for the first time in a half-year as supply shortages hit activity and businesses grew cautious during a summer spike of Covid-19 that triggered emergency restrictions.

Capital expenditures, excluding those for software, declined 1.1% in the three months through September, compared with the prior quarter, according to a finance ministry report Wednesday that included revisions to past results.

The capital spending data will feed into revised gross domestic product figures due next week. The initial report showed the economy shrank as consumers pulled back amid rising virus cases and restrictions on business hours, while firms cut spending by 3.8%.

“Capital spending wasn’t very good in the third quarter due to supply bottlenecks and the delta variant,” said economist Taro Saito at NLI Research Institute. “Business investment should pick up pace and become a driver of the recovery.”

Most economists see Japanese growth resuming this quarter, now that vaccination rates are above 75%, most limits on activity have been lifted, and supply shortages are starting to resolve.

Still, the emergence of the new omicron variant, which has triggered tighter travel restrictions across the globe, has introduced a new element of uncertainty just as the world heads into the holiday season. Japan this week shut its borders to new foreign visitors.

“Japanese business investment slowed in 3Q, pressured by virus curbs and supply-chain constraints. ...Order plans from the non-manufacturing sector show a relatively strong rebound. Manufacturers’ orders are set to fall due to China’s slowdown and the chip shortage. ...Even so, we expect capex to increase moderately next year as these problems should be temporary.”

Wednesday’s business survey also showed that surging commodity prices are squeezing Japanese business, even though most firms still aren’t passing their costs on to consumers.

Profits fell 7.9%, the most since the early days of the pandemic, when business activity ground close to a halt.