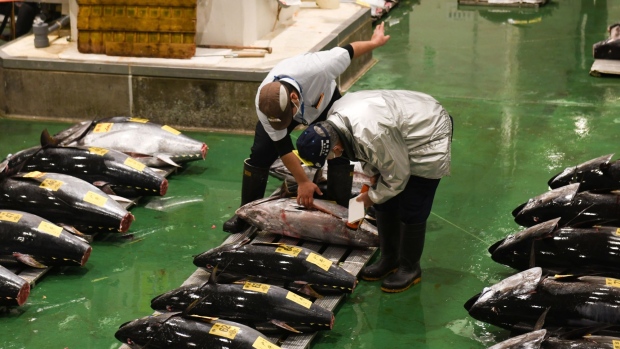 As the rest of the world raises interest rates to battle inflation, Japan curiously is clinging to low rates to raise wages and finally move past its long battle with deflation. But as Tokyo tries to hold the line, the fastest inflation in decades is spooking a country unaccustomed to it. Along with Russia’s war on Ukraine, the “decoupling” of China and the US is also raising tough questions for a historically pacifist nation. Japan’s biggest export market is China, but its national security has long depended on America.

This week, we devote our entire Stephanomics podcast to Japan, delving into its economy, its ties to China and the US and its efforts to stay on friendly terms with both. First, reporter Yoshiaki Nohara brings us the noisy scene inside the Toyosu Market, the world’s largest wholesale fish market. There, businesses face a dilemma: costs of materials are rising at a 9.1% clip, but consumer inflation is running at a more modest 3.6%. So, wholesale fish merchants, restaurants and other businesses are eating some of the inflation for fear of alienating a Japanese public that’s used to prices falling, not rising.

“We really wonder whether customers will keep coming back if we raise prices,” one businessman tells Nohara. That reluctance to boost prices, though, is creating a bit of a vicious cycle for Japan. Worker wages are stuck and won’t rise until businesses can pass along more of their rising prices to consumers. However, consumers won’t accept higher prices until they see higher wages. For now, the Bank of Japan and Ministry of Finance are trying to force wages up by keeping interest rates at rock-bottom levels—even if the yen craters, too.

Next, host Stephanie Flanders, who’s in Tokyo this week, chats with reporter Isabel Reynolds about the way Japan is being drawn into global conflicts and its delicate efforts to keep everyone happy. This week, Prime Minister Fumio Kishida ordered an increase in defense spending that could strangely put his country almost on par with Russia. Meantime, Japan finds itself caught between its loyalty to the US and its crucial trading ties with China, Reynolds says. The US has been signaling it’s getting more aggressive toward China on trade issues, and while Japan has been reluctant to take sides, it may be forced to follow America’s lead if things escalate, she says.

Finally, Flanders chats with Takehiko Nakao, a former senior official with the Ministry of Finance, about whether Japan is finally ready to shed its years-long deflation, as well as the nation’s need to ensure its own national security in light of the threat from China while also maintaining economic ties with Beijing.