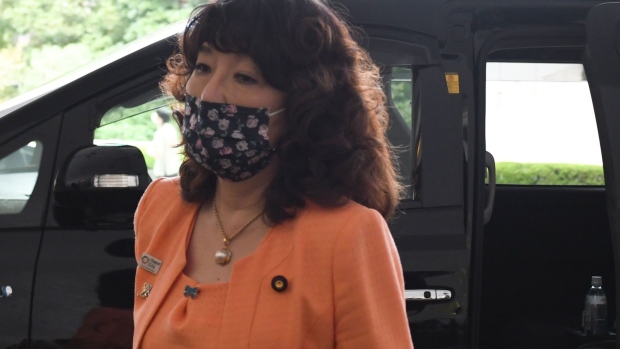 (Bloomberg) -- Japan’s ruling Liberal Democratic Party is looking to provide new support for heavily indebted firms amid fears that some of them may go bust after a Covid-related credit program ends, a senior party official said.

“The public and private sectors need to cooperate quickly to provide aid,” said Satsuki Katayama, head of the LDP’s Research Commission on the Finance and Banking Systems in an interview last month.

The LDP will draw up new support proposals for firms at risk of default, and aims to have them reflected in the government’s economic package that will be put together by the end of the month, Katayama said.

The new measures would follow on from a pandemic program of loans launched in March 2020 that deferred the paying of interest for up to three years and principal repayments for up to five years. Applications for that program ended in September.

Renewed support for firms that are effectively insolvent on paper is likely to fuel concern that the government is overdoing its efforts to keep inefficient businesses in operation, a factor that can contribute to lower growth over the longer term.

“We’re not planning some kind of uncontrolled attempt to keep zombie firms alive, but we need this type of effort to maintain the regions,” Katayama said.

Core local businesses and transportation providers are among the firms still suffering from the impact of Covid and in need of support, she added.

A possible solution might be for a public-private fund focused on regional revitalization to help deal with the economic effects of the pandemic, she said. The Regional Economy Vitalization Corporation of Japan could buy up the debt of struggling companies and reduce the burden of repayments, Katayama said. Private-sector institutions might then be encouraged to offer new financing.

This kind of public-private cooperation was used to support the recovery from the massive earthquake, tsunami and nuclear disaster in northeastern Japan in 2011, Katayama added.

While other countries including the US and UK have provided financing for SMEs hit by the virus, the scale of Japan’s aid has been enormous. The interest-deferred loan program to Covid-hit companies still has outstanding debt of 18.2 trillion yen ($126 billion) loaned by the government and 23 trillion yen lent by the private sector, according to the economy and industry ministry.

The Bank of Japan is now phasing out its Covid-era funding programs for struggling firms, some of which overlap with the government’s various loan programs. The BOJ’s extra loans during the pandemic peaked at just over 100 trillion yen in March, enough to pay off the debts left behind by every company that went out of business in the last two decades owing at least 10 million yen, according to Tokyo Shoko Research Ltd. figures.

With the unprecedented support from the government and BOJ, bankruptcies fell in 2021 to their lowest level since 1964 despite the global health crisis, according to Tokyo Shoko Research. Still, the number of companies that can’t cover their debt servicing costs from current profits for an extended period -- one definition of a “zombie firm” -- remains relatively large.

According to an estimate by Teikoku Databank, more than 10% of Japan’s companies fell into this category in 2020. Among these 165,000 firms, about 80% had borrowed money under special Covid terms, and 15.5% were concerned about repaying their debts.