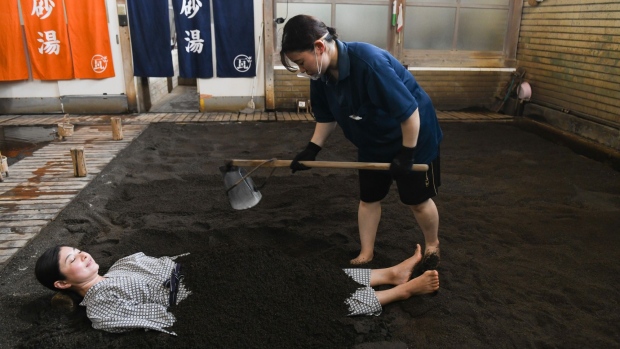 Visitors walk on the Ninenzaka slope in Kyoto. , Bloomberg

(Bloomberg) -- Japan’s residents are flocking to tourism hotspots and snapping up normally hard-to-get restaurant reservations even as Covid-19 infections surge to a record, in a sign one of the slowest major economies to fully reopen is adjusting to life with the virus.

Domestic travel is booming as people enjoy their first restriction-free summer since 2019 and as still-tight border rules keep away the hordes of foreign visitors that typically crowd popular attractions. Most residents are shaking off concerns about the current wave of virus cases, with travel agencies HIS Co. and JTB Corp. reporting no obvious rise in cancellations. Nippon Travel Agency Co. says any spots that become available are quickly booked.

The spread of highly contagious virus variants doesn’t seem to be dampening enthusiasm so far, even with the 7-day rolling average in new infections reaching 1,628 per million people, the highest among G-7 nations. Japan’s hospital beds are slowly filling up, reaching 48% occupancy as of July 27, according to data compiled by broadcaster NHK. The death rate is just 0.87 per million people, the lowest in the G-7.

The zest for domestic travel suggests that the world’s third-largest economy, one of the most cautious countries in reopening and with border curbs that are only eclipsed by mainland China’s strict rules, is increasingly ready to move on. Prime Minister Fumio Kishida has ruled out re-imposing nationwide curbs, and has said that his government may look to downgrade the status of Covid to endemic after the wave, which would allow Covid-19 patients to be treated at general clinics and remove the requirement for closely tracking case numbers.

Before the pandemic, Japan was at the peak of a tourism boom, welcoming almost 32 million visitors in 2019 who spent 4.8 trillion yen ($37 billion). But the arrival of Covid spurred a two-year border closure that effectively sealed off the country. It’s only recently been eased, albeit with a cap on daily international arrivals of just 20,000 and other restrictions that leave the industry a long way from a full recovery.

That’s devastated businesses that rely on overseas visitors, but it’s paved the way for a revival in domestic tourism. Local travel plans for July and August were 90% of pre-pandemic levels, according to a HIS survey published in June.

Tables at popular high-end restaurants have become easier to book as there’s no competition with foreign tourists, said Yuki Wakasaki, an official at online restaurant booking site Omakase, operated by GMO Internet Inc. Rental car operators can’t keep up with demand over summer after reducing their inventory to cut costs and as supply chain disruptions roil the auto sector, according to Japan’s industry group.

Still, a continued case spike may spook local authorities and high-risk groups, like the elderly. Osaka has urged older people to refrain from going out unless necessary and Okinawa has imposed social-distancing measures.

Nippon Travel warned the pace of bookings could slow if people become more cautious, while Japan Airlines Co. said people are likely to change plans only if restrictions come into effect.

“If the number of new cases continues to beat records, demand for travel and consumption will likely to fall despite the absence of restrictions,” said Takuto Yasuda, an economist at NLI Research Institute, in an interview. “If the government declares a state of emergency, it will have a greater negative impact on the economy.”

Most Japanese are still pushing ahead with their domestic travel plans, bolstering the case for a pivot to living with the virus that would bring the country in line with much of the rest of the world.

After more than two years of pandemic discipline, many are ready for normal life again.

Mitsuru Matsushita took part in his first group trip in three years in June. The president of Shizuoka-based staffing company Flair Co. organized a three-day retreat for his 20 employees on the southern island of Shikoku, where they visited local attractions, stayed in a hotel, went to bars and restaurants and enjoyed karaoke.

“I’m so glad we did it,” said Matsushita, who said a shift to remote work meant employees had lost their sense of belonging.“Everyone was happy.”