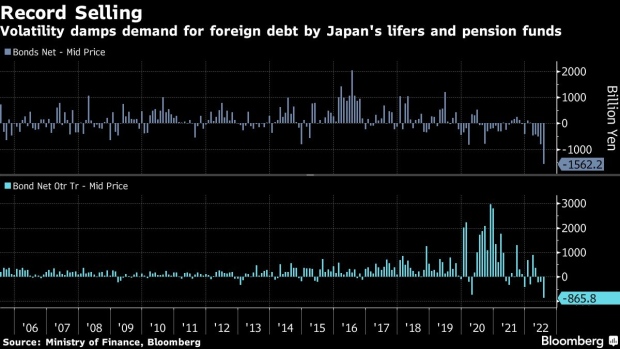 A woman with a dog speaks with a shopkeeper on the Sugamo Jizo-dori shopping street in the Toshima district of Tokyo, Japan, on Friday, Dec. 11, 2020. Japanese Prime Minister Yoshihide Suga has briefly put virus containment ahead of the economy by temporarily halting a nationwide travel campaign aimed at spurring spending among consumers including the elderly. Photographer: Soichiro Koriyama/Bloomberg , Bloomberg

Lifers disposed of a net 1.56 trillion yen ($11.5 billion) of the securities while trust banks’ trust accounts, which are seen as proxies for pension funds, sold 865.8 billion yen of the notes, according to preliminary data from the Ministry of Finance. Both sales amounts were the highest ever for the two groups.

Swings in global bonds have been on the rise as uncertainty over the growth and inflation outlook fuel abrupt shifts in policy wagers. Benchmark Treasury yields have climbed back to around 2.82% from a low of 2.51% reached last week after a robust US jobs report revived bets for another outsized Federal Reserve rate hike.

Rising hedging costs are also weighing on Japanese funds’ demand for foreign securities as they erode returns from investments in overseas debt.

“Headwinds for Japanese investors in general will continue to make them less active in foreign bond purchases,” said NLI’s Ueno. “Trust banks may not keep selling as it’s mostly dependent on yields and rebalancing, but life insurers will likely remain cautious as long as uncertainties linger.”