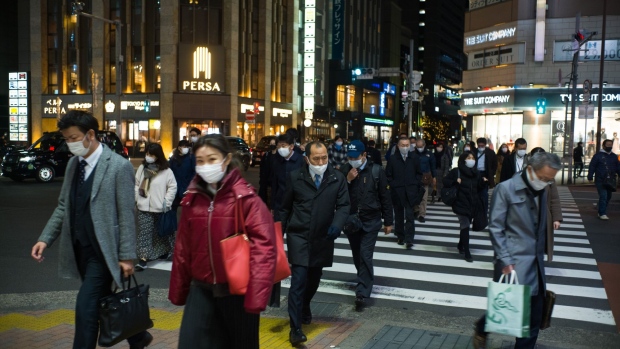 Evening commuters wearing protective masks cross a street in Tokyo, Japan, on Friday, Jan. 8, 2021. The state of emergency over the coronavirus that went into effect Friday for Tokyo and its surrounding area will weigh on Japans economy this quarter, said Japan's Finance Minister Taro Aso. Photographer: Kentaro Takahashi/Bloomberg , Bloomberg

(Bloomberg) -- Japan’s government maintained its assessment of the economy in January, using the same terms to describe its state for the seventh straight month, amid a jump in coronavirus numbers that’s triggered a renewed state of emergency.

In its monthly report released Friday, the Cabinet Office described the overall economy in the same grim terms as in December, saying conditions remain severe despite signs of improvement. The government upgraded its view of capital expenditure and housing construction, but lowered its assessment for private consumption and business conditions.

The assessment comes after Prime Minister Yoshihide Suga’s administration this month put more than half the country’s economy under a state of emergency amid a sharp jump in Covid-19 cases to records. Nationwide daily case numbers have been moving around 5,000 in recent days.

Japanese exports have been rebounding, increasing for the first time in more than two years in December thanks to a recovery in China, but other parts of Japan’s economy continue to lag. Prices haven’t risen for months and the country’s second state of emergency is hitting private consumption and the service sector.