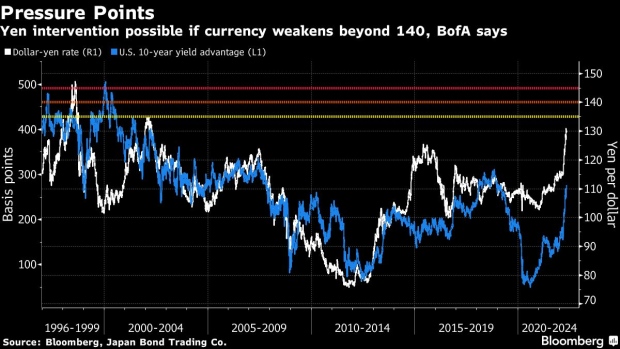 Japanese 10,000 yen banknotes are arranged for a photograph in Kawasaki, Kanagawa Prefecture, Japan, on Saturday, July 7, 2018. Japan’s currency rose against every single Group-of-10 peer in the first half, with an average 4.8 percent gain. Now a combination of U.S. protectionism, European populism and emerging market turmoil threatens to push the yen even higher in the second half, according to analysts. Photographer: Akio Kon/Bloomberg , Bloomberg

(Bloomberg) -- The yen may extend declines to 140 per dollar and that could trigger the Japanese government to spend $100 billion to limit further losses, according to Bank of America.

The currency hasn’t weakened to 140 since 1998, but it may be pushed to that level by a fresh surge in Treasury yields, BofA analysts including Shusuke Yamada in Tokyo wrote in a note published Monday.

The yen dropped to 131.25 last month, the weakest since 2002, after the Bank of Japan reiterated its intention to keep 10-year bond yields at 0.25% to help revive the economy. The finance ministry then issued its most strongly-worded warning yet on the currency’s slide, saying it would respond “appropriately” to abrupt moves in the currency.

“Yen weakness has come to a point where FX intervention by Japanese government has become a market focus,” the BofA analysts wrote. Even as the BOJ stresses the positive economic impact of a weaker currency, the sectors that are likely to be hurt by depreciation, such as households and SMEs, are much bigger in number than those that benefit from it, they said.

The yen strengthened 0.8% Wednesday after the Federal Reserve raised interest rates by half a point but Chairman Jerome Powell cooled speculation the central bank may boost borrowing costs in 75 basis-point steps at future meetings. That brought U.S. 10-year yields down to 2.93%, still well above BofA’s forecast that they will fall to 2.50% by year-end.

The speed of the yen’s decline -- it has still tumbled almost 12% in the past three months -- has caught Japanese policy makers off guard and exposed divisions between a central bank intent on stoking inflation and a government facing a backlash over rising prices.

A slower pace of depreciation would reduce the odds of intervention, according to BofA, which is currently forecasting the yen’s slide will go no further than 135 per dollar.

That’s very much dependent on what happens with Treasuries, because the BOJ will find it very hard to allow JGB yields to increase, the analysts wrote. Policy makers face a “structural inability to hike rates meaningfully as higher rates would increase Japan’s debt-financing cost with general government gross debt now standing above 250% of GDP,” they said.