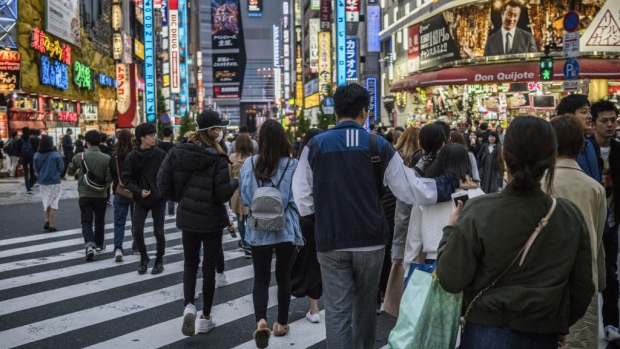 People walk past stores in the Shinjuku District of Tokyo, Japan, on Saturday, April 14, 2018. Japan's headline inflation measure is expected to rise to 1.1 percent this year and in 2019, from 0.5 percent in 2017, the International Monetary Fund said in its World Economic Outlook on Tuesday. , Photographer: Bloomberg/Bloomberg

(The Bloomberg View) -- Even as politicians in the U.S. and Europe rage about foreigners supposedly swamping their shores, one of the world’s most insular countries — Japan — is on the verge of passing what might be its most sweeping immigration reform to date. Welcome as this would be, the plan isn’t sweeping enough.

A bill approved by the lower house of the Diet would open Japan’s doors to two types of foreign workers. Lower-skilled laborers in 14 sectors would for the first time be able to apply for five-year visas after demonstrating a good command of Japanese. And highly skilled workers would be eligible for work visas that can be renewed indefinitely, could bring their families with them, and could apply for permanent residency after 10 years. The government aims to push the bill through the upper house before the current session ends.

It’s a good plan, as far as it goes. There’s no question Japan needs the newcomers. At just above 2 percent, the country’s unemployment rate is the lowest it’s been since the early 1990s; labor shortages are acute in several industries, including construction and nursing care. The longer-term picture is even more worrying. Recent forecasts predict that the population will shrink to two-thirds its current size by 2065. By then, one in four Japanese will be over age 75.

Prime Minister Shinzo Abe’s government has made progress in getting more women and senior citizens back into the workforce, and is working to nudge up the fertility rate. It’s also allowed in more foreigners than many realize, partly through a technical internship program meant to impart skills that workers can take back to their home countries. The new bill is an acknowledgment that such measures won’t be nearly enough to stop Japan’s working-age population from imploding. There’s widespread opposition to mass immigration, so the admission is brave.

In several respects, though, the government’s efforts fall short. For one thing, the new bill leaves the internship program in place, which is a pity since it’s been abused. It should be cleaned up first, or eliminated.

And the plan is still pretty vague. The government talks about helping with language training and housing, for instance, but with few specifics. These details matter. Nearly 60 percent of Japanese-language teachers are volunteers, often elderly, and foreigners are routinely rejected when they try to rent apartments. While private-sector startups have begun to address these gaps, a concerted effort from the government is likely to be necessary.

This raises a bigger question: Can Japan keep on fudging the issue? Abe has avoided giving details because he fears a backlash. Many Japanese companies are reluctant to hire even highly skilled foreigners because of fears that their local staff aren’t ready for colleagues from abroad. This is deterring foreign talent: In one recent survey, Japan was ranked the least attractive place to work in Asia. As countries from Taiwan to South Korea to Singapore — and even China — look abroad for labor, Japan needs to change its thinking.

Japan’s leaders need to work on this, rather than pretending it’s unnecessary. They could start by dispelling the myth that an influx of migrants will lead to more crime. As well as strengthening support programs for immigrants, they should be pushing Japanese companies to internationalize and conduct more business in English. Rather than assuring voters that migrants won’t put down roots, they should encourage more contact with foreigners.

Popular resistance to immigration is a fact, no doubt — but rather than accepting it as a given, the government should be trying to change minds. If it doesn’t, Japan’s labor-shortage problem might be insoluble.

Editorials are written by the Bloomberg View editorial board.