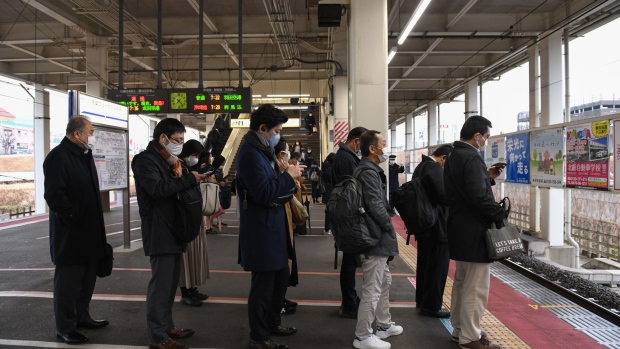 Commuters wait for a train at the platform of Chiba Newtown Chuo station in Inzai. Chiba Prefecture, Japan, on Monday, March 8, 2020. Japanese Prime Minister Yoshihide Suga extended by two weeks a virus state of emergency for the Tokyo region that has expired on Sunday, trying to maintain a declining trend in infections as the country looks to host the Olympics in about four months. Photographer: Noriko Hayashi/Bloomberg , Bloomberg

(Bloomberg) -- Japan’s parliament approved a law to set up a new Digital Agency as the government’s handling of the coronavirus pandemic, including stumbles in its vaccine rollout, underscored the country’s need to catch up on technology.

The bill, which passed in the upper house Wednesday following approval in the more powerful lower house last month, establishes an agency aimed at bringing greater digitalization to ministries and administrative bodies. The Digital Agency, to be launched in September with an initial staff of 500, will also plan a nationwide shift of local government processes into the cloud and try to help facilitate digitalization in the private sector.

From delayed cash handouts at the beginning of the pandemic last year to the low uptake of remote work and problems with online booking systems for vaccination appointments, the virus has highlighted Japan’s difficulty in taking advantage of more efficient ways of working.

Many Japanese in recent days have struggled to access websites at local authorities to book appointments for coronavirus vaccinations, contributing to a slow rollout that has irked the public and ranked among the slowest in developed nations.

Last year, many waited months for emergency cash handouts meant to help them weather the economic hit of the coronavirus pandemic, while the process went far more smoothly in places such as neighboring South Korea.

A survey published by broadcaster JNN on Monday found that support for Prime Minister Yoshihide Suga’s cabinet fell to 40%, its lowest since he took office in September. More than 60% of respondents said they didn’t approve of the government’s virus management and about three quarters didn’t think the government would meet its target of vaccinating those aged 65 and over by the end of July.

Suga’s predecessor, Shinzo Abe, urged a rethink of traditional clerical practices last year when he was prime minister, after the custom of hand-stamping paperwork was found to be hampering government targets for reducing the number of commuters to rein in virus infections.