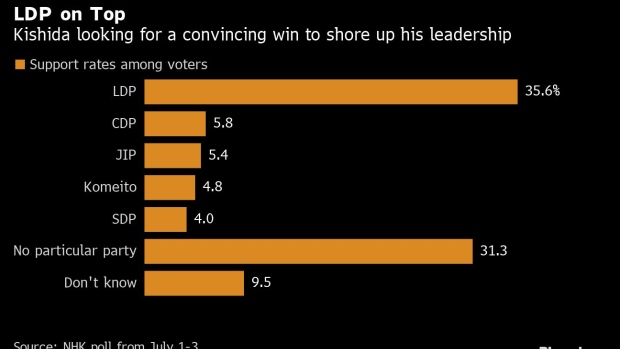 (Bloomberg) -- As politicians around the globe rush to tamp down inflation, Japan Prime Minister Fumio Kishida is betting instead that older voters in particular will look past surging prices in a crucial election on Sunday.

Kishida has endorsed the Bank of Japan’s unorthodox stance of keeping borrowing costs at rock-bottom levels even as inflation heats up and the yen has slid to a 24-year low. During the campaign for the upper house election, Kishida made the case that higher interest rates would hurt mom-and-pop shops and homeowners even more.

The stakes in the vote — the last scheduled nationwide election for three years — are bigger than usual: A decisive win would cement Kishida as prime minister for the foreseeable future, an outcome that was in doubt when he took power last October. A weak victory, on the other hand, would raise questions about his strategy and add pressure on the central bank to shift course.

“I don’t see any economic factor pushing the BOJ to adjust policy now, but the risk is whether Kishida will change his stance toward monetary easing after the election,” said Seisaku Kameda, a former BOJ chief economist. “That must be watched very closely.”

While most other world leaders have been more afraid of the political costs of inflation, in Japan it appears Kishida’s strategy is paying off. Polls show his ruling coalition is on track to retain a majority in the upper house, with opposition parties far behind.

That’s in part due to voters like 85-year-old Tsugio Ito. The retired Tokyo shop owner, who survives on a monthly pension of 160,000 yen ($1,180), said rising power costs are keeping him awake at night during a heatwave that has also exposed the fragilities of Japan’s power grid.

“In this heat, if you don’t use the air conditioner, you’re gonna die,” Ito said. “That’s what I mean when I say this is a matter of life or death.”

Still, despite all that, he plans to vote for Kishida’s party — mostly because he doesn’t trust anyone else.

“Despite all the various problems with the LDP, it has more clout than the other political parties,” Ito said. “Even in our shopping district, we’ve had help building facilities many times after asking LDP representatives.”

That sentiment is broadly shared among elderly voters who make up about 30% of the population and are much more likely to vote than other age groups. Their spending, meanwhile, accounts for almost 40% of consumption in the economy.

Beyond the election, Kishida is also watching to see if a potential pull-back in spending will derail an already sluggish recovery from the pandemic. At the same time, economists are looking for any signs that a greater acceptance of higher prices in an aging society might finally deliver a stable and favorable form of inflation in Japan. For now, the concerns over spending seem the more likely to materialize.

“I really hope the government can come up with ways to make sure prices don’t climb any higher,” said Moto Wakabayashi, an 81-year-old resident of Narashino, a city east of central Tokyo. “They’re already getting extremely hard to deal with.”

Like many seniors in Japan, Wakabayashi has started reining in spending. She’s dropped salmon from her shopping list in favor of cheaper processed meat from a nearby Costco, with more penny-pinching likely ahead as she tries to keep within her pension budget.

At 2.5% overall, Japan’s inflation is still far from the levels causing public dismay in other countries. But the pressure from key items is more intense: Even with government subsidies keeping a lid on items such as gasoline, energy prices rose 17% in May, fresh food climbed 12% and household appliance prices gained more than 7%.

Opinion polls show that inflation is the top concern among voters, but the LDP is still way ahead. The latest survey by public broadcaster NHK showed Kishida’s party supported by 35.6% of voters, followed by 5.8% for the Constitutional Democratic Party of Japan and 5.4% for the right-wing Japan Innovation Party.

Elderly voters are wary that opposition parties proposing things like sales tax reductions may eventually cut pensions to find revenue, according to Hiroshi Yoshida, the head of the Research Center for Aged Economy and Society at Tohoku University.

“Older people think it could be worse if others take over,” he said.

Kishida gained widespread support earlier in the year for his tough stance on Russia, and conservative line on opening up amid the pandemic. He also took early action to subsidize fuel prices, measures that he ramped up in late April.

The opposition has tried to portray high prices fueled partly by the slumping yen as “Kishida inflation,” but the label hasn’t stuck, according to Koji Nakakita, a professor at Hitotsubashi University. “Ultimately, they don’t trust the opposition parties to manage government effectively,” he said.

Hiroshi Onodera, 79, a resident of Miyagi Prefecture in Japan’s northeast, used to support the Social Democratic Party. But his days of attending May Day protest marches calling for wage growth are over.

The turning point came when former Prime Minister Shinzo Abe started raising the minimum wage in 2013 as part of his Abenomics campaign to reflate the economy.

“It’s true that living is tough with the increased price of oil and inflation,” Onodera said. “But if the minimum wage goes up, that cushions the impact. A vote should be used to address problems not just to express objections.”

Kishida has called for higher wages as he pushes forward what he describes as a new form of capitalism that spreads income more easily. But he’s finding that difficult to achieve.

Companies have been reluctant to raise wages in a country where laying off regular employees is difficult both from a legal and social perspective. Figures released this week showed wages fell 1.8% in May after accounting for inflation, another factor suggesting that spending momentum will soon fizzle out.Kishida has also called on people to boost any retirement nest eggs by dabbling more in markets and doubling their investment income. More than a half of Japan's total household assets are kept in cash or deposits, offering them no protection from inflation. But that's an idea that offers little comfort or help to the current generation of pensioners.

“It’s too hard to start investing now as moves in the economy and markets are too big and too many to hedge against,” said Hisao Kato, 79, another resident of Narashino. “Even if you diversify your investments, it seems tough to find a safe spot.”

Even as the LDP is likely to win the election, Japan’s long-term troubles have few easy solutions. The International Monetary Fund estimates Japan’s debt load at about 263% of gross domestic product this year, making it unlikely pensions are going to get significantly larger as demographics work against government finances.

That’s a worry for younger citizens in a nation with one of the world’s highest life expectancies. Some 77% of Japanese said they are worried about retirement, according to a separate BOJ survey. And even those who are already retired are worried about living too long.

“Pensions aren’t going to rise and I’m barely making ends meet by eating through my savings,” Nobuyuki Tejima, 71, said in Sugamo, a popular neighborhood for seniors in Tokyo. “This is supposed to be the era of 100-year life spans, but I’ll go bankrupt if I live that long.”