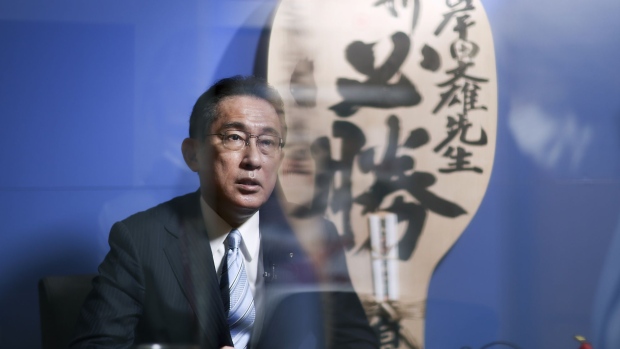 (Bloomberg) -- If China has a favorite in the battle to be Japan’s next prime minister, it’s probably not Sanae Takaichi.

The former internal affairs minister has sought to stand out in the four-way race to lead Japan’s ruling Liberal Democratic Party with hawkish policies toward Japan’s powerful neighbor and top trading partner. Among other things, she held an online meeting with Taiwanese President Tsai Ing-Wen and expressed a willingness to deploy U.S. intermediate-range missiles in Japan.

While Takaichi lacks the popularity of rivals Fumio Kishida and Taro Kono and is a longshot in the LDP election Wednesday, she’s one of two women in the race and enjoys the backing of her former boss, ex-Prime Minister Shinzo Abe. Her candidacy underscores increasing concern in Tokyo about Beijing’s intentions and illustrates the risk of renewed tensions between the world’s second- and third-largest economies.

“Takaichi is the most likely to bring damage to China-Japan ties and instability to East Asia,” said Liu Jiangyong, a professor of international relations at Tsinghua University in Beijing. “She’s a right-wing politician who lacks the correct view of history.”

Takaichi’s office didn’t respond to a request for an interview and she postponed at short notice an appearance at the Foreign Correspondents’ Club of Japan that had been scheduled for Monday.

The four candidates -- including Seiko Noda, another woman who once led the internal affairs ministry -- are vying in the most unpredictable LDP leadership fight in decades after unpopular Prime Minister Yoshihide Suga abruptly withdrew from the race. The winner is all-but certain to become premier days later, thanks to the LDP’s dominance in parliament, but must face a general election within weeks.

The contest has put a spotlight on chilling ties between Japan and China in the wake of Beijing’s clampdown on Hong Kong and each of the candidates has been pressed for their reponse. The victor will closely coordinate with U.S. President Joe Biden to stitch together a more cohesive coalition to check China’s military rise, which Suga warned in an interview with Bloomberg News last week could threaten Japan’s economy.

That tussle is testing Japan’s traditional policy of balancing relations with China, a vital business partner, and the U.S., its only treaty ally. In the days before the LDP vote, Takaichi has been turning up the heat.

She uploaded a video of her discussions with Tsai, during which she said security should be an area of cooperation with Taiwan, and expressed support for Taiwan’s entry to the TPP regional trade agreement. Both statements are likely to anger China, which sees Taiwan as part of its territory and requires countries to renounce ties with Taipei as a condition of relations.

Takaichi’s support for intermediate-range missiles at U.S. bases in Japan comes despite Beijing having said any country accepting such a deployment would face retaliation.

Takaichi has vowed to continue regular visits to Yasukuni Shrine, which is seen by many in China and South Korea as a symbol of Japan’s past militarism due to the 14 Class A war criminals enshrined there. Takaichi has also advocated doubling the defense budget and warned about the dangers of Chinese companies investing in Japan.

Kishida -- long seen as a dove for his campaign to abolish nuclear weapons and settle historical disputes with South Korea -- said in an interview with Bloomberg News earlier this month that Taiwan would be the “next big problem” facing the government. He separately accused China in a YouTube discussion last week of wanting to export “its authoritarian system around the world” and said Japan needed to stand up for “universal values.”

“He knows how to strike a balance between the necessity of building up deterrence against a more assertive China’s military activities around Japan and the importance of stabilizing Japan’s difficult relationship with its largest trading partner,” said Yuichi Hosoya, a professor of international politics at Keio University in Tokyo.

Kono’s position on China is also complex. While serving as defense minister, he expressed concern about China’s rise and said Japan should join the “Five Eyes” intelligence grouping among the U.S., the U.K., Canada, Australia and New Zealand.

He’s also shown a willingness to be friendly -- even drawing criticism from conservatives for a smiling selfie with Chinese Foreign Ministry spokeswoman Hua Chunying he posted on Twitter in 2018. Kono has said he wouldn’t visit Yasukuni while prime minister.

Candidates for the Japanese leadership have reversed course after election. Four of the five who ran in 2012, when Chinese-Japanese ties were at their most hostile since World War II, pledged to build on East China Sea islands disputed with China. The plan never materialized. Instead the winner, Abe launched a campaign to improve frosty relations, gradually melting the ice through high-level meetings.