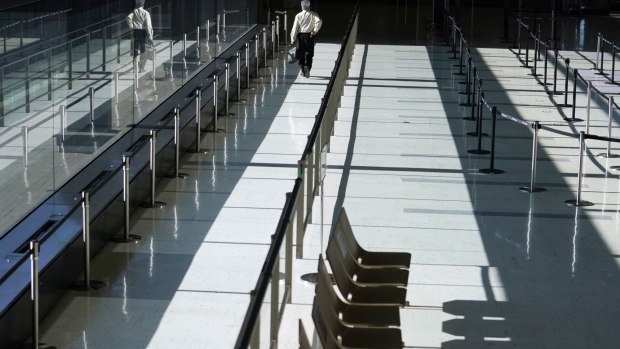 An empty check-in area in a departure hall at Narita Airport in Narita, Chiba Prefecture, Japan, on Tuesday, Nov. 30, 2021. Japan closed its borders to new foreign arrivals from Tuesday and have its own citizens isolate on arrival from countries where the omicron variant has been found, while experts around the world analyze the risks it presents. , Bloomberg

(Bloomberg) -- After his predecessor was forced from office for a slow-footed Covid response, Japanese Prime Minister Fumio Kishida took one of the world’s most aggressive steps to contain the omicron variant and then rapidly backpedaled.

Less than 24 hours after his government called for a ban on new flight bookings into Japan, it reversed course amid confusion and complaints the move went too far by potentially preventing the country’s own citizens from returning home.

While the reversal was embarrassing, it may not in itself be damaging for Kishida, who has said he would take responsibility for any complaints that he’s being too cautious. Opinion polls show the Japanese public remains extremely concerned about a new wave of infections.

One former adviser to the government, Yoichi Takahashi, tweeted the ban was “appalling” and the government should properly protect Japanese nationals, whether inside or outside the country.

“It was a bit haphazard,” said Tsuneo Watanabe, a senior fellow at the Sasakawa Peace Foundation in Tokyo. “They acted, realized they had gone too far and reversed course. But the turnaround was fast, and I think they will learn to function better.”

The reversal added to frustration during a period when air travel usually picks up in Japan and left many with travel plans in limbo. It created uncertainty for Japanese and foreign nationals with legal residency in Japan who are currently overseas about whether they could return to their homes.

Kishida has attempted to distance himself from the bookings suspension, telling media Thursday he had “received a report” about it. Transport minister Tetsuo Saito later apologized for the handling of the matter and blamed it on one department within his ministry.

On Friday, domestic media were quizzing officials about the government narrative on the policy’s origins, in a development that could expose Kishida to criticism in parliament, which is set to open next week.

The stakes are high because after months of struggles, Japan has largely tamed the spread of the disease and posts some of the lowest numbers of infections and deaths among advanced countries. It recorded just 117 cases nationwide on Wednesday, compared with 86,565 in the U.S.

Any loss of faith in Kishida’s handling of the situation could mean he fares poorly in next year’s upper house election and put him at risk of being dispatched through the “revolving door” of short-serving premiers.

“Kishida has shown a lot of awareness of how things could quickly go wrong if he mishandles the pandemic,” said Tobias Harris, a senior fellow for Asia at the American Progress think tank.

The unpredictability of the pandemic may be the biggest risk to his grip on power. His predecessors Yoshihide Suga and Shinzo Abe, who frequently seemed out of tune with the public sense of urgency on the virus, rapidly lost voter support.

Suga introduced subsidies for domestic travel and pressed ahead with the staging of the Tokyo Olympics amid public doubts over safety, while immunizations began months later than in other developed countries.

Yet the vaccine rollout eventually picked up and polls show voters’ views on the government’s handling of the pandemic have turned positive. The current low case load from which Kishida’s administration is benefiting may be largely due to policies put in place before Suga resigned. More than 77% of the population is now double-vaccinated -- one of the highest rates in the world -- and mask wearing in public is almost universal.

Kishida’s government instructed the country’s two major airlines to halt new inbound flight bookings for a month from Dec. 1 as experts around the world rushed to analyze the threat posed by omicron which the World Health Organization has described as “very serious.”

But a day after the policy kicked in, Kishida rolled it back, saying it had caused “confusion” and instructing officials to tell the airlines they should consider the demand from Japanese citizens who wish to return home.

The measure, along with a blanket ban on new entry by foreigners, and a bar on even foreign residents returning from southern Africa, has already proved too late to ward off the omicron variant. Japan has recorded two cases in people who arrived from overseas before the clampdown.

It remains to be seen whether the flipflop or the ensuing blame game will damage Kishida’s support, a month after he won an unexpectedly robust victory in a general election. Opinion polls show other policy proposals, including cash handouts for families with children, have divided voters.

Yet with the already unpopular opposition Constitutional Democratic Party of Japan struggling to regroup after its poor election showing, Kishida’s long-ruling Liberal Democratic Party has little reason to seek a change at the top in the near future.

“If he was slow to react, he’d be criticized, but he doesn’t look slow,” Watanabe said. “In an emergency, it’s better to try something -- if it doesn’t work then you take it back.”