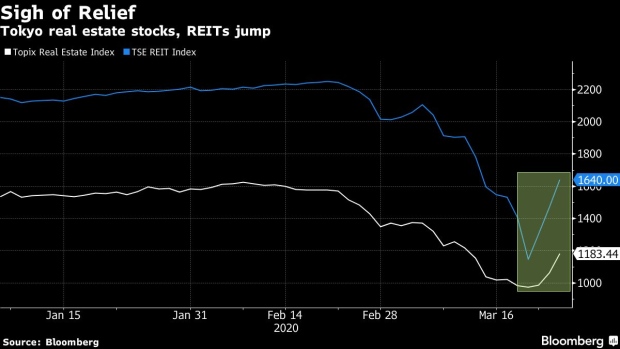 A pedestrian holding an umbrella waits to cross a street in Tokyo, Japan, on Monday, June 5, 2017. Booming construction of hotels, office buildings, shopping centers and apartments, financed by record lending for real estate by Japanese banks, has driven the huge gains in land prices in Tokyo and Osaka. Photographer: Noriko Hayashi/Bloomberg , Bloomberg

For the better part of a decade, investors and speculators in Japan’s booming real estate sector have been worried about one thing: what happens after the 2020 Olympics.

As real estate prices in Japan enjoyed a six-year recovery, the specter of a post-Olympics real estate crash had loomed so large as to risk becoming a self-fulfilling prophecy. But with the Olympics now postponed for a year in an unprecedented move due to the coronavirus, the real estate party can continue.

The Topix Real Estate Index on Wednesday enjoyed its best day since Bank of Japan Governor Haruhiko Kuroda unleashed his second QE “bazooka” in October 2014, surging 11% and the best performer of the 33 Topix sub-groups.

Real estate developers also made up the top three performers on the Nikkei 225 index, which surged the most in 12 years. Tokyu Fudosan Holdings, the biggest gainer on the Nikkei, jumped the most on record. Tokyo Tatemono Co. gained the most since 2013. And Sumitomo Realty and Development Co., which will redevelop the site of the Olympic Village into more than 5,000 apartments, closed limit up, the biggest gain since 1999. The games have helped create buzz in the Harumi area where the village will be located, with concern property values could plummet if the games were canceled.

The TSE REIT Index has also recovered this week, buoyed by the U.S. Federal Reserve’s announcement of unlimited QE. The three-day gain in the index is the most on record, clawing back around half of the losses suffered this year as the coronavirus spread.

“Amid a slowdown in the real economy, an increase in the money supply due to quantitative easing will have a direct impact on inflation expectations,” Yasuhiro Ishii, an analyst at Mitsubishi UFJ Morgan Stanley Securities Co., wrote in a note Wednesday. “We think the recent sharp rebound in the TSE REIT index owes largely to expectations for gains in the underlying value of J-REIT assets which are backed by portfolios of prime domestic properties.”