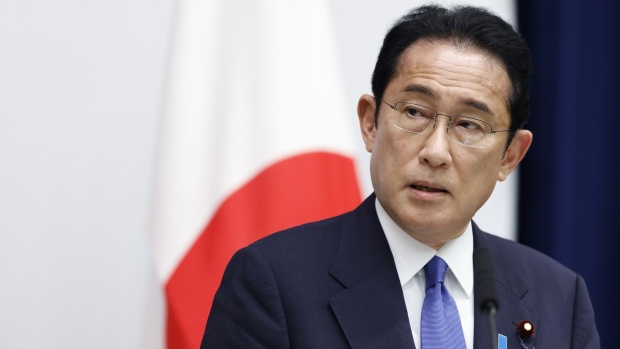 Fumio Kishida, Japan's prime minister, speaks during a news conference following the Quadrilateral Security Dialogue (Quad) leaders meeting at the prime minister's official residence in Tokyo, Japan, on Tuesday, May 24, 2022. A meeting of the leaders of the four-nation security grouping was held on the final day of US President Joe Biden’s first trip to Asia since taking office. , Bloomberg

(Bloomberg) -- Japan’s ruling coalition parties are set to win a majority in a July 10 election for the upper house of parliament, with the main opposition party failing to pick up support from voters worried about rising prices, a major poll showed.

Prime Minister Fumio Kishida’s Liberal Democratic Party and its junior partner Komeito are together likely to secure 65-80 of the 125 seats up for grabs, the Yomiuri newspaper said, citing a national poll of about 61,000 people conducted from Friday through Sunday in cooperation with the Nikkei newspaper. The figure is above the 56 seats local media said they would need to win to keep their majority.

While the upper chamber holds less power, a convincing victory would allow Kishida to put off another election test for as long as three years and avoid the “revolving door” so many of his predecessors have passed through.

The main opposition Constitutional Democratic Party is not expected to make major gains that would eat into the ruling bloc’s majority. It’s forecast to win 13-24 seats, while the conservative opposition Japan Innovation Party is expected to follow close behind on 11-19 seats, the paper said. Elections for half the seats in the 248-seat house take place every three years.

Going into the vote, surveys have shown anxiety over inflation and the economy have undermined previously strong support for Kishida’s government. The latest survey from national public broadcaster NHK found 50% of respondents supported the cabinet, down 9 percentage points in two weeks.

A survey carried out by broadcast news network JNN July 2-3 found just 20% of respondents approved of the government’s handling of inflation, while 67% said they disapproved. Almost two-thirds of respondents said price rises had damaged their household finances.

Despite the worries, the LDP remains the party of choice for voters who have kept it in power almost continuously since its formation in 1955 and see it as being more capable of guiding the world’s third-largest economy than opposition groups.

Kishida has unveiled a raft of inflation relief measures ahead of the vote to keep a lid on prices. The government estimates the steps, including subsidies on gasoline, would shave 0.5 percentage point off overall consumer prices from May through September.

While headline inflation figures are far lower than in many other wealthy countries, consumer prices excluding fresh food climbed 2.1% from a year earlier in May.