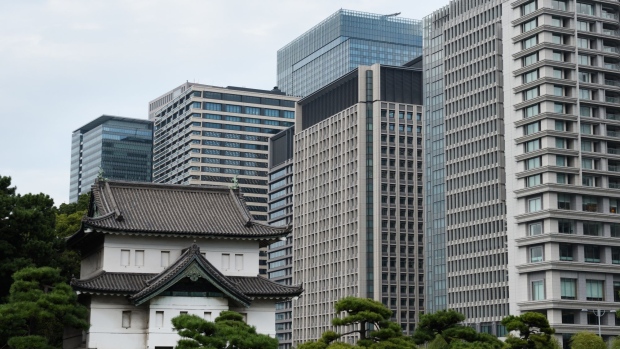 A guard tower of the Imperial Palace, left, stands near buildings in the business district in Tokyo. Photographer: Akio Kon/Bloomberg , Bloomberg

(Bloomberg) -- Tokyo may have a chance to realize a long-held dream of becoming a global financial hub if it can attract people fleeing a Chinese clampdown on Hong Kong, according to a senior Japanese ruling party lawmaker.

“What Japan offers that Hong Kong doesn’t is freedom,” Satsuki Katayama, who heads an LDP panel on foreign labor, said in an interview Tuesday. “If Hong Kong becomes the kind of place where people’s Facebook likes are being checked, will they put up with that? I think people want to live somewhere normal.”

The Chinese law brings yet more uncertainty as Hong Kong faces its deepest recession on record after months of pro-democracy protests and the coronavirus pandemic. Unemployment has risen to a 15-year high, while investors are putting money elsewhere. Some expatriates and Hong Kong residents have said they’re considering leaving the city.

The U.S. has already responded by beginning to remove the city’s special trade privileges.

Some of the problems Japan faces include a tax burden that can be higher than in other Asian financial hubs, bureaucracy seen as excessive and a language barrier. On top of this, Japan currently bars almost all foreigners from more than 100 countries and regions from entering in a bid to contain the spread of the virus.

Katayama raised the idea of seeking to lure Hong Kong’s financial professionals in parliament in June, eliciting a favorable response from Prime Minister Shinzo Abe. That spurred the LDP to include the issue in a policy proposal last week. Katayama said the party is looking to produce an interim report in the autumn and a fuller report by the end of the year.

She acknowledges it’s not an area in which the country has so far excelled. Only about 13,000 people were recorded as living in Japan on high-level professional visas as of June last year.

“If Japan had a lot of advantages, this would already be happening,” she said, citing inheritance and other taxes, along with the language difficulties, among Japan’s weak points. On the other hand, its 127 million-strong population could give it an advantage over smaller countries like Singapore, she added.

The LDP may look into the possibility of a new visa status that doesn’t entail full residency, Katayama suggested. In the longer term, she said she wants to set up a kind of “offshore” zone that would stand apart from Japan’s regular taxation system. The question remains as to whether Japan’s voters would support such a plan, she added.