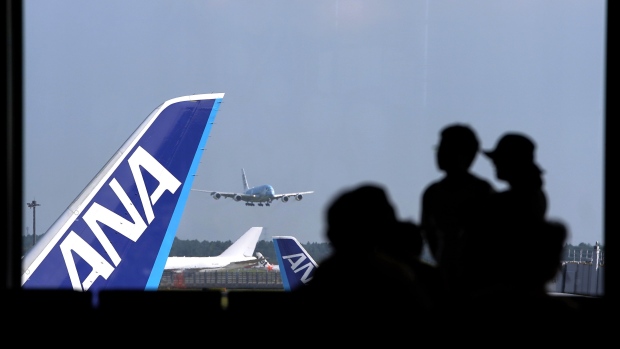 All Nippon Airways Co. (ANA) aircraft stand as an airplane lands at Narita Airport in Narita, Chiba Prefecture, Japan, on Monday, Aug. 26, 2019. The decline in South Korean tourists in July dented an otherwise positive result, with the total number of visitors to Japan climbing 5.6% from a year earlier. Photographer: Toru Hanai/Bloomberg , Bloomberg

(Bloomberg) -- ANA Holdings Inc. is set to receive about 400 billion yen ($3.8 billion) in subordinated loans from five lenders, people with knowledge of the matter said, as the struggling Japanese airline reels from the steep dropoff in passenger traffic due to the pandemic.

Like in every country, airlines in Japan have been struggling amid the global coronavirus outbreak. ANA as well as Japan Airlines Co. are forecasting domestic passengers to drop by about 50% this month. ANA was considering raising 200 billion yen via a public share offering and cutting costs by selling aircraft and disposing of non-core businesses, the Nikkei newspaper reported last month.

An ANA spokesperson declined to comment, saying that the carrier wasn’t the source of information.

Subordinated loans are typically given to debt-heavy or financially weak borrowers to bolster their financial health, because credit rating companies count part of such loans as capital, helping the businesses enhance their credit status. For lenders, they are riskier than straight loans but typically carry higher interest rates.

Earlier this month, the Japanese government acknowledged the severe business environment facing airlines and said it was ready to “respond appropriately.” The administration has taken steps to support the industry including landing fee measures, access to funding through government financial institutions and backing a campaign aimed at promoting domestic travel, Chief Cabinet Secretary Katsunobu Kato said on Oct. 8.

ANA Holdings is also planning to cut wages and won’t pay winter bonuses, national broadcaster NHK reported earlier this month. Taking into account the already reduced summer bonuses, employees will see a reduction in annual wages of as much as 30%, the broadcaster said.

(Updates with detail on Japan government backing for airlines.)