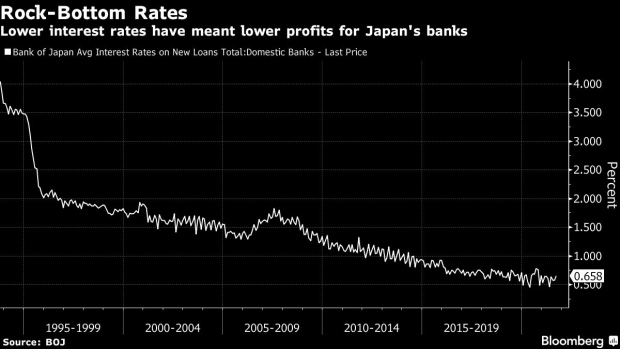 The Bank of Japan (BOJ) headquarters at night in Tokyo, Japan, on Sept. 27, 2021. The Bank of Japan will release its quarterly Tankan business sentiment survey on Oct. 1. Photographer: Toru Hanai/Bloomberg , Bloomberg

(Bloomberg) -- More regional banks than expected took advantage of an unprecedented program from the Bank of Japan to encourage them to consider mergers or take other measures to speed efforts at boosting profitability.

In the first half of this fiscal year, 228 financial institutions used the program, which paid 0.1% on some reserves held at the bank, the BOJ said in a statement Friday. Total interest payments came to 4.9 billion yen ($42.9 million).

Japanese lenders have faced years of ultra-low interest rates and a rapid shrinking of the population that has shrunk their business opportunities.

Amid criticism that the BOJ’s policies are at least part of the problem, the central bank last year opened a new deposit facility paying interest on some reserves for regional lenders that agree to consider consolidation or other ways of streamlining. The program runs through March 2023.