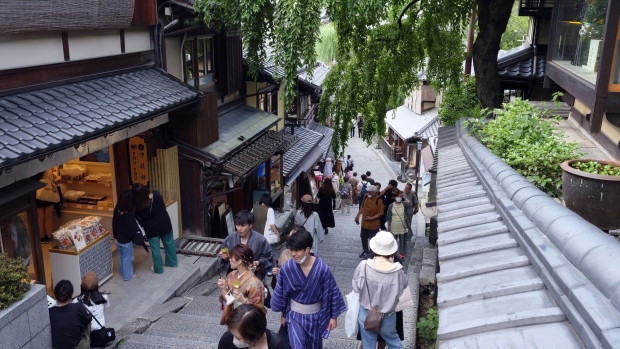 Visitors on the Sannenzaka slope in Kyoto in June. , Bloomberg

From the streets of Kyoto to the slopes of Hokkaido, retailers, restaurants and hotels are seeking to recover the revenue they lost during the pandemic with the return of overseas visitors starting Oct. 11.

One of the last remaining rich economies with tight border controls, and with the yen at quarter-century lows against the dollar, the archipelago is now an affordable and attractive destination for overseas visitors. That’s welcome relief for the 4,000-plus enterprises that folded after retailers adopted curbs in early 2020 on operating hours and the country closed its borders to tourists.

“When Covid hit, it was hard for us,” said Kenya Katayama, mayor of Niseko, a ski resort on the northern island of Hokkaido that’s popular with skiers and snowboarders. “So far, winter reservations are doing well.”

Spending by inbound travelers totaled 4.8 trillion yen ($33.5 billion) in 2019 before lockdowns began, according to Nomura Research Institute. The question now is how much of that will come back, and how soon. The archipelago topped the World Economic Forum’s Travel & Tourism Development Index earlier this year; Japanese airlines are already ramping up international flights.

Even so, there’s still some uncertainty. A limited reopening in June for group tours failed to attract any meaningful traffic. That’s making it difficult for tourist-facing businesses to gauge the level of demand. Some boosted staffing ahead of an anticipated surge, while others are waiting to justify spending on staff, facilities and services. The lack of workers, many of whom were let go during the pandemic or found other jobs, is complicating the issue.

“We are preparing so that we can do our best when inbound tourists return,” said Takehiro Nishiyama, who runs his family’s Nishiyama Ryokan in Kyoto. The inn’s income shrank 90% during the pandemic, he added. “I think tourists will return in the spring. Guest houses are on the brink of ruin, so we want to restart quickly.”

Domestic travel is also picking up, with many residents taking advantage of the lack of lines and affordable prices. The country was at the peak of a tourism boom before the pandemic, with inbound visitors reaching a record in 2019. The small trickle of foreigners allowed in last year spent 120 billion yen, a fraction of the total seen three years ago.

ANA Holdings Inc. announced last week that it will boost international flights and cabin staff to meet an anticipated rebound in air traffic. Instead of firing staff, Japan’s biggest airline furloughed much of its staff and arranged jobs for them in other industries to await a recovery. Now, they’re being brought back and hiring is picking up.

Japan Airlines Co. is getting ready as well. “We want to contribute to revitalizing the Japanese economy by being fully prepared to welcome foreign visitors,” the carrier said in a statement last week.

In Niseko, which before the pandemic saw a healthy influx of winter-sports enthusiasts from Asia, Australia and New Zealand during the northern hemisphere winter, there appears to be a split between those betting on a surge of returning business and others taking a more cautious approach.

“People are still skeptical,” said Shinichi Shimoda, president of the Niseko Resort Tourist Association Co. “They don’t know if foreign tourists are really going to come, but even if they did, they can’t secure enough workers in time.”

Paul Wright, general manager of the Park Hyatt Niseko Hanazono, which opened inauspiciously in January 2020, said the hotel is already full from just before Christmas through the first week of the new year. While occupancy rates are less clear after that, the hotel is preparing for more business, he said.

“No one was let go,” said Wright, who is seeking to reach full staffing of 240 to 250 people for the first time since opening, from roughly 200 right now. “Because we’ve been able to sustain our team, we are able to scale up quite confidently and we are recruiting.”

Ahead of the winter season, Niseko last week was mostly quiet, with many shops and restaurants still closed. There weren’t many job ads on storefronts, but recruiting is already happening online.

Even with a full border reopening, it’s unlikely that Japan will see pre-pandemic numbers until China allows inbound and outbound travel, currently restricted as part of its Covid Zero policy. Before the pandemic, visitors from Asia’s biggest economy accounted for more than a third of tourist spending in Japan.

Kyoto, one of the biggest beneficiaries of the tourism boom, is now anticipating a rebound in visitor traffic. Known for more than a millennium as the capital before Tokyo, Kyoto’s wealth of ancient shrines, temples, gardens and cuisine helped almost double its foreign visitors to 8.9 million in 2019, from 4.8 million four years earlier.

Paul Christie, CEO of Walk Japan, a company that provides walking tours for foreign tourists, said revenue plummeted by about 99% during the pandemic. In January 2020, demand kept 112 people, including 80 freelance tour guides, busy. Although the guides have had to find other jobs, most now want to come back. Christie is currently planning for a full re-opening in November.

“A lot of people were queuing to join tours during the pandemic, which wasn’t going to happen,” Christie said. “It was a bit like having a sweet shop with a great queue down the street, but not being able to open the doors.”