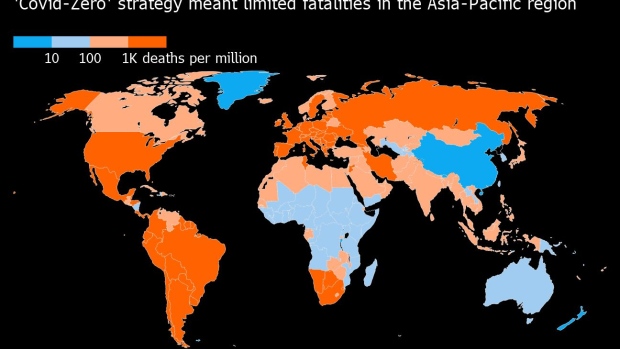 A sign directs travelers to a Covid-19 testing center at Narita Airport in Narita, Chiba Prefecture, Japan, on Tuesday, Nov. 30, 2021. Japan closed its borders to new foreign arrivals from Tuesday and have its own citizens isolate on arrival from countries where the omicron variant has been found, while experts around the world analyze the risks it presents. Photographer: Toru Hanai/Bloomberg , Bloomberg

(Bloomberg) -- In the world’s oldest nation, less than one person a day is dying from Covid-19.

The six confirmed deaths in Japan over the past week is the lowest it’s been in the country since July 2020, before the second wave of pandemic fatalities. Compared to other developed nations, such as Germany or the U.S., it’s an even more remarkable result -- no Group of 7 nation has had so few deaths since the pandemic started in earnest.

That slump parallels the collapse in reported cases, which are down from more than 25,000 a day in August to fewer than 200 a day every day for the past three weeks. The drop in cases and deaths is even more striking considering that Japan’s population is much larger than all the G-7 nations except the U.S., and is also older, increasing the risk of death from Covid-19.

It’s unclear exactly why the wave of cases and deaths Japan faced in late summer and early fall has receded so dramatically. A comprehensive vaccination campaign is at least partly responsible for the drop, with more than 77% of the nation’s 126 million residents fully inoculated as of Monday.

The vaccination rate among the vulnerable elderly is even higher, with 92% of those 65 years and older having received two shots. However, many other developed nations that have rolled out similarly comprehensive vaccination campaigns are now seeing rising infections and deaths.

Public use of face masks is almost universal, although authorities have not issued a mask mandate. Behaviors like mask wearing and reducing visits to potentially crowded spaces have been consistent throughout the waves of infection, with Japan’s residents cautious even when cases have ebbed.

Japan has had 145 confirmed Covid-19 deaths per one million people since the pandemic began, trailing behind places such as mainland China, New Zealand, Taiwan or Australia that tried to completely eliminate the virus, or South Korea, which has also kept deaths very low. However at this point in time, the daily number of deaths in Japan is below even Australia or South Korea, which are seeing a rise in cases and deaths.

Despite Japan’s recent success in reducing infections and deaths, the government was still swift to react to the appearance of the omicron variant, closing the nation’s borders to new entries by foreigners and limiting the number of Japanese nationals who can return home. The clampdown came just three weeks after it had begun lifting its pandemic border restrictions, which have been some of the strictest in the developed world.

Whether that will be successful at halting the spread of the new variant or whether Japan will face rising cases or deaths as temperatures drop through winter is unknown. But at least for now, the risk of dying from Covid-19 is the lowest it has been in a very long time.