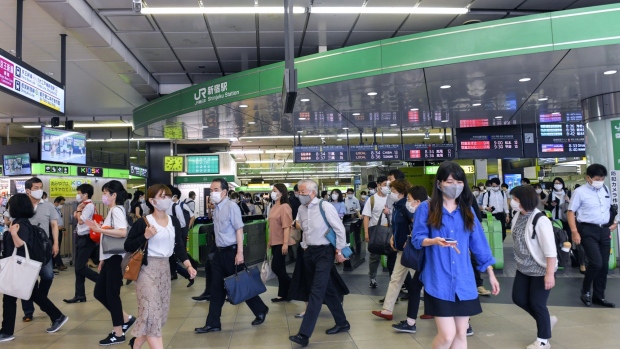 Morning commuters wearing protective face masks walk at the entrance of Shinjuku station in Tokyo, Japan in Tokyo, Japan, on Thursday, July 2, 2021. While the number of infections directly connected with the Olympics has so far been relatively low, Tokyo and its surrounding areas are experiencing their worst-yet virus wave. Photographer: Noriko Hayashi/Bloomberg , Bloomberg

(Bloomberg) -- Dai-ichi Life Insurance Co. is planning to raise wages for its 50,000 staff by 5% on average, according to a person familiar with the matter, joining a growing list of Japanese companies that are preparing to increase compensation as inflation jumps.

The pay rise by the unit of Dai-ichi Life Holdings Inc. would take effect in April, according to the person, who asked not to be identified because negotiations with the labor union are ongoing.

Japan’s annual pay talks are in the spotlight as the cost of living soars and the possible exit of the central bank’s ultra-easy monetary policy hinges largely on sustained salary growth. Prime Minister Fumio Kishida has called on businesses to raise wages above the inflation rate, which hit 4% in December, the highest since 1981.

The increase in compensation at Dai-ichi Life, the country’s third-largest life insurer by assets, would include both base pay as well as automatic raises given for seniority or years of service.

The rise in base pay would be the first in 28 years for the insurer’s 10,000 employees that are on a career track including managerial positions, the person said. The other 40,000 are sales agents.

Dai-ichi Life’s bigger rival, Nippon Life Insurance Co., is also among companies that are considering raising wages ahead of the spring pay round.

(Updates with details of pay increases in fourth and fifth paragraphs)