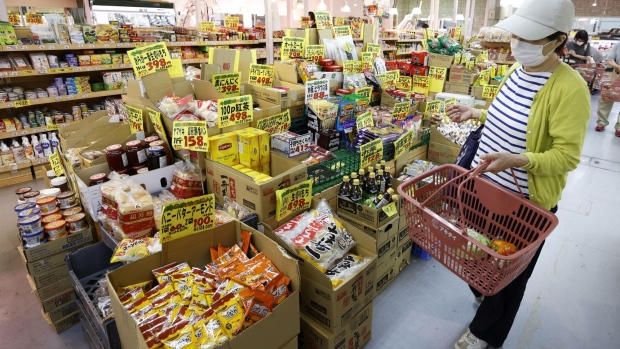 A customer shops at an Akidai YK supermarket in Tokyo, Japan, on Monday, June 27, 2022. Japan's key inflation gauge stayed above the Bank of Japan's target level of 2%, a result that will likely keep speculation alive over possible policy adjustments at the central bank. , Bloomberg

(Bloomberg) -- Japan’s economic recovery is forecast to be losing momentum amid the growing concern over a synchronized global slowdown, according to economists surveyed by Bloomberg.

The world’s third largest economy is expected to post an annualized 3.4% expansion in the quarter through June from the previous period, according to the median forecast by economists in the July 1-6 survey. That’s down from the 4% growth expected in the previous survey.

The recovery is forecast to keep slowing down from there with a 1% increase seen in the second quarter of 2023.

The weaker outlook for Japan’s economy reflects worries abroad, with rising bets that there may be a recession in the US. Further slowdowns in Japan may mean Prime Minister Fumio Kishida will have to speed up any plans to provide additional support for consumers and businesses.

Meanwhile, inflation is seen to be stickier. Consumer prices excluding fresh food are expected to stay at or above 2%, the central bank’s target, through the first quarter of next year.

The economy contracted in the first three months of this year mainly due to Covid-19 curbs on businesses. Consumption is expected to drive a rebound in the second quarter, while rising inflation at home and an expected slowdown in Japan’s key trading partners are generating headwinds against the recovery momentum.