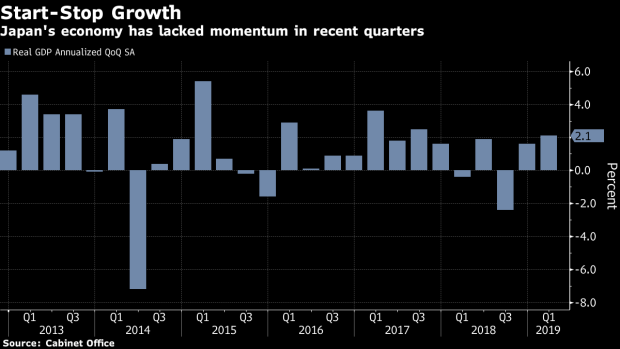 Visitors look out from the observation deck of the Roppongi Hills Mori Tower, operated by Mori Building Co., in Tokyo, Japan, on Monday, March 18, 2019. Amid intense debate on Japan’s inflation target, some officials at the central bank think the 2 percent goal will probably remain out of reach for the next three years, according to people familiar with the matter. Photographer: Toru Hanai/Bloomberg , Bloomberg

(Bloomberg) -- Japan’s economy unexpectedly grew during the first quarter, despite slowing global growth and trade tensions hitting exports and business investment. The result may cool a growing debate over a tax increase for now.

Gross domestic product expanded an annualized 2.1% in the three months through March, according to a Cabinet Office report Monday. That compares with economists’ median estimate for a contraction of 0.2%.

To contact the editors responsible for this story: Malcolm Scott at mscott23@bloomberg.net, Henry Hoenig